How to Feed Your Overweight Dog 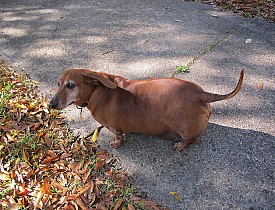 “Most dogs that are chubby, the thing you want to do is cut out one-third of their calorie intake,” said Dr. Dwight Baghdoyn, DVM of Williamsburg Animal Clinic in Massachusetts. “But the first thing is to estimate what and how much they are eating and how much exercise they get – just like with people,” said Baghdoyn.

In speaking with two veterinarians, I learned that working with your overweight pooch is pretty similar to working with human weight loss. The exception being that the pet owner is in control of the pet’s diet. “The main problem is convincing the owner they have a problem,” said Dr. Robert Schmitt, DVM, of South Deerfield Veterinary Clinic, also in Massachusetts.  “Everything, just about, tastes good to them (the dog). They don’t know enough to quit eating, so we have to retrain the owner,” said Dr. Schmitt.

The effects of early neutering

Baghdoyn said that one of the reasons a dog may be overweight is a trend by shelters to neuter dogs earlier than a typical breeder would, by two to three months.  Neutering causes metabolic changes, which are not harmful by themselves, but leads owners to feed their dog puppy chow far longer than is healthy in that situation. “They no longer have the metabolism of a puppy once they are neutered, so they need to have adult food to have a proper balanced diet,” said Baghdoyn.

How marketing may contribute to a dog owner’s confusion

“The way dog food is sold is the same way potato chips are sold. More shelf space equals more sales. In other words, a ten-foot shelf sells more product than a five-foot shelf,” said Baghdoyn. The ever-growing array of dog food choices can be daunting and confusing. Baghdoyn recommends talking to your veterinarian to get an idea of what a healthy weight for your dog, then checking the calories content, amount of protein, and serving size of the foods you buy your dog.

Evaluation of your dog’s weight

Schmitt said that if you are concerned your dog is overweight, especially if you have a large dog, to initially bring the dog in once a month to be weighed and evaluated. “It’s not like you can put your 160 pound Golden Retriever on the bathroom scale,” he said. Baghdoyn agreed adding that it is a good idea, no matter what, to have a professional “have their hands on the dog” once or twice a year, at the least to have a better idea of the dog’s health.

Both Dr.’s said that the dog may also need to be evaluated for any metabolic disorder, low-thyroid being the most common, which requires a blood test.

Some dogs may require a prescription diet such as Hill’s RD (Restricted Diet) or Purina OM (Obesity Management). “These foods are for people who have tried everything else,” said Baghdoyn.

Home cooking for your dog

Schmitt said that some owners opt out of using commercial brands of dog food, in hopes of having a healthier, leaner dog. There are even cookbooks to support the idea. However, Schmitt said that it can be very tricky to find the right balance of food for your dog. “I don’t recommend this (home cooking for your dog) unless you are working with a veterinary nutritionist,” said Schmitt. He added that the problems reside in getting more of one nutritional element than the other, which can ultimately harm your dog. He said for example, too much meat equals too much phosphorus and not enough calcium. “The body will draw the calcium from somewhere, usually the bones,” said Schmitt who added he has seen a number of small breeds with fractured legs due to imbalanced diet.

Baghdoyn said however, that adding vegetables, such as carrots or green beans to your dog’s food temporarily, may help your dog with weight loss.

So ultimately, the message is the same for dogs as it is for humans in terms of weight-loss - eat right, eat less, get more exercise, and see a medical professional with some regularity.

Cris Carl writes for Networx. Get home & garden ideas like this on Networx.