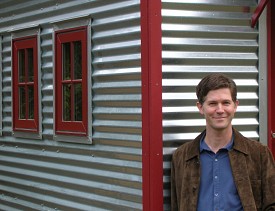 The power behind Tumbleweed homes, Jay Shafer has been building and inhabiting tiny houses since 1997. His first tiny house was a mere 89 square feet, but once he realized that he could still live pretty comfortably in a such a small space, he was hooked. Since then he’s started the Tumbleweed Tiny House Company, which constructs and sells small houses.

Shafer, a contrarian by nature, got the idea to start making and living in tiny houses when he discovered that many states have laws prohibiting diminutive dwellings. These laws, which are often meant to discourage vagrants from inhabiting tool sheds or prohibit unscrupulous landlords renting out broom closets, are overly broad, Shafer believes, and constitute a form of forced consumption.

Starting at $50,000, Tumbleweed homes aren't exactly a bargain, but are  considerably cheaper than their full-sized counterparts. The company also sells the plans for their mini-houses at a far cheaper rate, so DIYers who want to get in on minimalist living can put up their own tiny houses.

More recently, Shafer has settled down to start a family and is now living in a relatively palatial 500 square foot house in northern California. He maintains a 100 square foot tiny home on the property and still prefers those condensed confines.

What inspired you to start building and living in tiny homes?

You know, when I first started I was just not attracted to the idea of having 30 years to pay off a mortgage.

To be honest when I found out that there are laws prohibiting small houses — the occupation of small houses — that really got me into the idea. Because what they are saying is that living small is an illegal action.

What sort of impact do you think you’ve had on people over the years?

The word has gotten out that bigger is not necessarily better and I’m really happy to have been a part of that.

What are some of the most unique uses you’ve seen for some of the tiny homes that you’ve built or sold plans for?

Well I’ve had some very interesting requests. I’ve had people ask for tiny houses to be used as part of a brothel. It never went through, but that was the request. We’ve had requests for tiny houses that have bulletproof windows with turrets on top. The range of uses seems to be unlimited.

But more than that we get three primary requests, which are for vacation cottages, and more typically than that, for a backyard extension to existing homes — a bedroom or a studio — and finally people living in them full time.

As you’ve experienced both living in and designing tiny homes over the years, what have you learned and how have your designs changed?

Actually it evolves a lot. Just when you think you have a perfect design that’s very efficient you start seeing a lot of wasted space, not that there can be a lot of wasted space in 100 square feet to begin with. My first house was fairly efficient, but in building that 100 square foot house on wheels I’ve redesigned it a couple of times. And at this point, once again I’m at the stage where I can’t imagine how I can eke any more functional space out of it.

I’ve focused on making use of all the vertical space, so there’s a lot of floor-to-ceiling shelves and a sleeping loft. A lot of it has to do with feeling out what feels comfortable for the average person. I think I’ve whittled it down to where I wouldn’t want to go too much smaller with the bathtub I’ve designed and the kitchen design, they are just very minimal structures now.

I would recommend that people shoot for being very organized. Rooms that are organized just feel bigger, they feel more spacious.

When making the change to a tiny home, what was the biggest sacrifice?

I was living in the back of my truck for a while and living in an Airstream Trailer for a while. In those cases, initially, in the truck for example, I’d gotten down to just a bed and some storage and that’s really all I needed to survive.

I missed having a laptop when I was living that way. And I also missed having a sink in the back of the truck. A good way to assess what you’re gonna miss is to just go camping for a week.

Who are your design heroes? Who inspires you?

I really like Ross Chapin; he designs pocket neighborhoods. I’m influenced by vernacular architecture. I like houses built by common people, for common people.

For my own taste, I’m not a big Frank Gehry fan. In my eyes, it’s kinda show-offy.

You’ve recently moved from a very tiny house to a slightly larger, but still tiny house. Can you talk about the size change and how that’s affected your life?

A lot of people asked me when I was living in my tiny house for over a decade, “What would you do if you had a family?” If I had it my way, we’d have three tiny houses of about 120 square feet. But [my wife] didn’t want to live in a 120 square foot house. We have my tiny house right next to the 500 square footer, which is the cheapest house we could find and happened to be about the right size for our needs.

I still kind of refer to the house as “her house” or “the bunk house,” because truth be told a lot of my reasons for moving into a small space is because I can’t handle a lot of responsibility. So I still take care of my tiny house and help out with the house, because I do sleep over there and eat over there.

How can people get involved with Tumbleweed Homes?

The movement is so broad now. When we first started doing this stuff there weren’t many references. You’d Google “small house” and you wouldn’t come up with much. Now there’s all these small-house companies.

I think the best way to help — and it seems kind of selfish — [is] just think about your own needs, meet them, but don’t exceed them.

Find a reliable, local builder to construct your own tiny house.