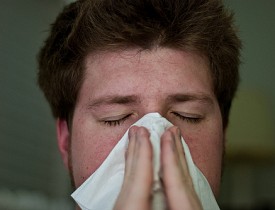 Flu season is in full swing, which means many people will be desperately trying to flu-proof their homes to keep contagions at bay. While people will go to great lengths to keep from getting sick, many of the things we do to purge the home of germs are pure myth, and won’t actually help. Here are some of the top flu-proofing myths debunked.

Myth 1: A cold, drafty home will cause you to catch cold or flu.

The truth is, there really isn’t any correlation between cold and germs, and your body’s immune system can handle winter’s icy chill, the New York Times reported. Cold and flu season do peak during the winter months, but the correlation probably has more to do with the fact that people spend a lot more time indoors in the winter, making it easier for germs to jump from one person to another. While you can save a bunch of money on your home heating bill by sealing up drafts and installing better insulation, unfortunately you won’t be insulating yourself from the flu.

Myth 2: You can protect yourself with hand sanitizer.

By offering germophobes the option of purging their hands of pathogens even when a sink isn’t handy, alcohol-based hand sanitizers like Purell have taken off in popularity. While these sanitizers will kill germs on contact, there is little indication that they actually decrease the rate of illness, according to several recent studies. The problem is that hand sanitizers clean your hands, but the flu is an airborne virus. The flu spreads when a sick person’s cough or sneeze causes little particles of pathogens to take to the air, and you can’t scrub those away with a few squirts of Purell.

Crank up the thermostat, slip into a hot bath and you’ll just sweat out the cold, some people think. While a hot bath might be soothing when you’re ill, it won’t actually make you better, says ABC News.

Myth 4: You can carpet bomb your house with antibacterial soap to rid it of disease.

Antibacterial soaps, which contain a range of active ingredients like triclosan and sodium benzoate, have long promised to purge our home of illness. The problem, however, is that both colds and flu are caused by viruses, not bacteria. These soaps might work against bacterial infections like staph and E. coli, but have no real effect on viral infections. If you really want to do a number on both bacteria and viruses, just reach for ordinary bleach.

Myth 5: You can blast away germs with an ultraviolet light.

UV-C sanitizing wands have become a popular disinfectant in recent years. Rather than relying on harsh chemicals, these devices blast germs with a certain type of ultraviolet light that kills them on contact. While UV light systems certainly work on an industrial scale, and have been put to use killing germs in hospitals for more than a hundred years, the small handheld units have little effect, says the L.A. Times. Shining the light on every square inch and around every odd angle of a surface is really difficult, particularly since the commercially-available wands aren’t that large. The devices also do little to stop airborne pathogens, which are the main cause of colds and flu.

Myth 6: You can prevent getting a second cold by changing your toothbrush.

There’s no need to change your toothbrush after you get sick, says Slate.com. Like snowflakes, every strain of cold or flu is different. But once your body defeats a particular strain, you’re immune, so you can’t give yourself the same cold you’ve already had.