We Tried It: Eating Jack-o-Lantern 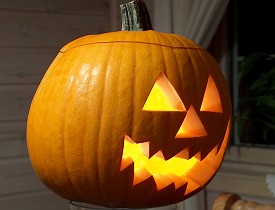 Can you eat a Jack-o-lantern? In a word, yes. It tastes OK (if a little bland without spices, condensed milk and a crust) and provides plenty of healthy nutrition. In fact, it's possible to eat nearly the entire Jack-o-lantern, with the possible exception of the stem and the stringy goop between the seeds.

First, a few caveats: We survived our little test with our health intact, but legally we can't officially recommend eating Jack-o-lanterns because carved pumpkins can become contaminated with dangerous pathogens.

Also note that the name Jack-o-lantern may also refer to a poisonous bright orange mushroom that resembles a chanterelle. You definitely should NOT eat that Jack-o-lantern.

The safest way to eat a Jack-o-lantern is to draw faces and other patterns on the outside of pumpkins with non-toxic markers or paints, instead of carving them. The pumpkin should last for weeks, and can be cooked and eaten after Halloween.

The second best option is to scoop out all the seeds (and bake them for a delicious snack), then carve out as much flesh as possible, leaving about a half-inch of skin to keep the Jack-o-lantern intact. This way, you can use most of the flesh while it is still fresh. If the skin is not rotted or decayed, some suggest pickling the pumpkin skins.

The most dangerous option is to scoop out the seeds, carve out a Jack-o-lantern, light it with a candle, enjoy the glowing décor, then cut it up and eat it.

Which did we pursue? Number three, of course. We're living on the edge. For you.

We carved a face into a medium-sized pumpkin (saving and refrigerating the carved-out pieces as the control for our experiment). Then we lit a small candle and let it burn all evening, and left it sitting in the dark overnight (we may eat irresponsible things, but we do not leave candles burning unattended).

In the morning, as there were no visible signs of rot or decay, we set to cutting up our pumpkin and cooking it (alongside the "control" pieces carved out the night before). We first discarded all wax residue and the flesh surrounding the wax, as well as the charred Jack-o-lantern "cap."

Most recipes for pie, soup, risotto and other pumpkin dishes call for pumpkin puree. To make pumpkin puree, you can bake, microwave or steam sliced pumpkin. Then peel and mash.

We steamed our pumpkin chunks and peeled them. We sampled several pieces, and found no difference in taste or texture between the refrigerated control pieces and the candlelit pieces left out overnight.

Granted, none of it tasted great. We read many suggestions for using the pumpkins in place of winter squashes in our favorite recipes, but none of it seemed very appealing with this rather bland pulp that resembled a watery potato more than any winter squash.

Better to enhance with sugar, spices, milk and eggs. We ended making a tasty pumpkin pie with our former Jack-o-lantern. It's a tough job but somebody has to do it.