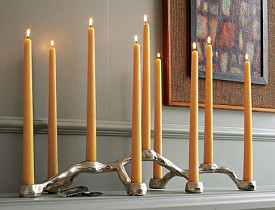 Since the advent of the candle, little has changed in its basic concept and candles are still widely used for the light they produce, which is decorative in and of itself.  The design of candlesticks has certainly changed from the old days and here I’ve gathered an eclectic mix of modern candlesticks and holders that still serve a functional need, while adding to the decoration of a space.

Root Candelabra from West Elm: West Elm’s Root Candelabra features both the modern touch of silver aluminum as well as the rusticity of a twisted branch. This piece is a perfect accent for fall and winter design schemes, particularly as it can stand alone in a more streamlined, modern décor.

Mikaela Dörfel's Double Candleholder: Scandinavian Design Center offers a gorgeous mirrored steel Double Candleholder that is inspired by dancing forms and balance of masculine and feminine sensibilities. This is a piece that is sculptural and beautiful on its own, yet also serves a functional role in the home as well.

Jalex Studios Heel Candleholders: These Heel Candleholders from Jalex Studios via Etsy have Lady Gaga written all over them. Made from bamboo and zebra wood, these candle sticks attract the eye for their interesting wood pattern and overall shape. It’s only after a while that you notice it’s actually a pair of ladies shoe heels.

McG Design Copper Pipe Candlesticks: Industrial design comes home with Copper Candlesticks from McG Design made from plumbers pipe. Infinite variations are possible for single or multiple holders. The copper can be polished to maintain the bright and shiny look of new pipe, or allowed to develop a natural verdigris patina over time.

Linda Merrill is a Hometalk - http://www.hometalk.com - writer. Get smart home & garden advice like this - https://www.networx.com/article/designer-picks-modern-candle-sticks - on Hometalk.com.