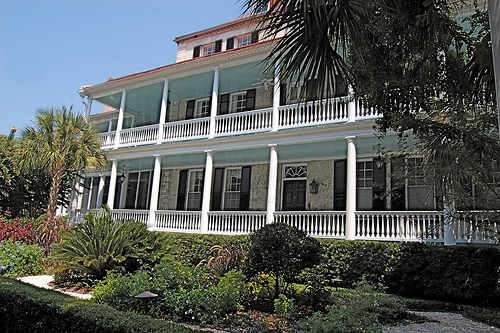 Have you ever noticed that in parts of the South, people paint their porch ceilings light blue? The color is called "Haint Blue", and it comes from a tradition of the Gullah people. The Gullah are a group of African Americans who live on the coast of South Carolina and Georgia. They are originally from the rice-growing region of West Africa, including Sierra Leone, Liberia, and Senegal. The culture of Sierra Leone was particularly influential on the Gullah.

Gullah folklore suggests that painting the ceiling of one's porch keeps away "haints," which can be described as ghosts or restless spirits. The Gullah have influenced the aesthetic of houses in the Southeast. In places like Savannah, Georgia and Charleston, South Carolina, you'll notice that many houses have light blue porch ceilings, with a tinge of green. Ask a painting contractor in Charleston, or see Yale University's page about the Gullah for more information about the tradition of Haint Blue.