The term housing project may not conjure images of sculptures, gazebos, time capsules and a “cyberschool,” but all these features are part of the Parklawn Public Housing Development. The Milwaukee project dates to a 1936 Works Progress Administration affordable housing project.

Parklawn today has a community center, daycare, YMCA and a technology-heavy 400-student elementary school. The centerpiece of the development is Monument Park, which the non-profit Project for Public Spaces has honored as one of the great public parks in the country. A network of walkways connects a central gazebo with a variety of monuments, sculptures, informational plaques and other artwork.

Casa Feliz, the “happy house” in Spanish, is a bright, cheery and funky stack of blues and reds that house 59 studio apartments designed for extremely low-income residents. The building has an LEED Gold rating and one of the first green roofs in San Jose. It also is designed to maximize natural lighting and ventilation, was built with toxic-free building materials, low-flow plumbing fixtures and energy-efficient appliances. 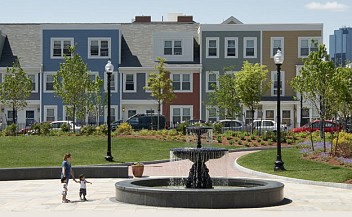 The blighted Maverick Gardens housing project on the Boston waterfront has a new life as Maverick Landing, a mixed-housing development with 305 subsidized apartments. The former high-rise blocks gave way to modern townhouse-style buildings. It is also now designed to be more pedestrian-friendly. The project is still under development, and a new community center is being built at the site. It will provide both youth and adult education and employment opportunities.

It is also greener than the average public housing development, with solar panels and energy-efficient windows, appliances and flooring. 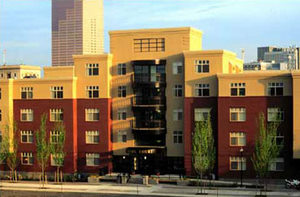 The Pearl District is a former industrial hub that has been transformed into a buzzing mixed-use neighborhood thanks to both creative businesses and solid public planning. The district includes 800 public housing units mixed among other apartments in six multi-story buildings. There is also a new affordable senior housing building in the district.

A widely available walking tour map highlights several parks and many historic sites throughout the Pearl District. While retaining the historic character of much of the architecture, the developers of the Pearl District also are focusing on green building and remodeling techniques. There also are free light rail, bus and trolley lines through the district.

A stark, modernist white spiral next to Interstate 10 is designed as a beacon for the homeless in Los Angeles. The Skid Row Housing Trust built New Carver with 97 furnished efficiency apartments designated to help keep people off L.A.’s notorious Skid Row when they are coming out of jails, hospitals and other facilities and situations.

The design is eye-catching and functional. The curves help mitigate freeway noise, and the building includes a sky deck and a large open community room. There also are other communal spaces and gardens, along with sites for medical and social services. 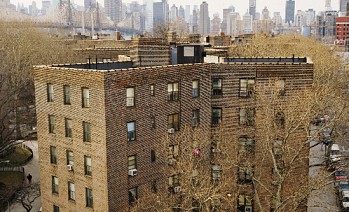 After the demolition of Cabrini Green and other huge, ugly and notoriously crime-infested Chicago housing projects, Queensbridge Houses is now North America’s largest public housing project — and one of the ugliest. The dilapidated brown buildings date to 1939 and form two Y shapes.

The complex has some basic amenities, and the apartments have seen some recent upgrades, but it is still an eyesore. For what it’s worth, the complex has several high-profile former residents: Nas, Capone and at least a dozen other famed rappers, as well as Ron Artest and other basketball stars. 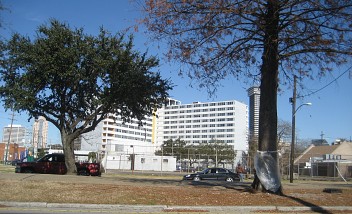 For better or worse, Hurricane Katrina took out many of New Orleans’ housing projects. The storm spelled the end for some rundown, crime-infested buildings, but also left large numbers of low-income residents homeless.

The city has ordered the demolition of much of the sprawling Guste Apartments complex in uptown New Orleans. However, the demolition was partially put on hold because of a lack of other affordable housing. As a result, these blighted buildings remain. 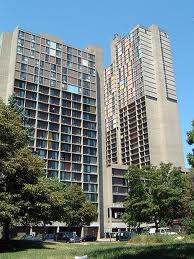 The McKnight Building in Riverside Plaza is one of the tallest and ugliest buildings in Minneapolis. The imposing concrete masses of Riverside Plaza were opened in 1973 at the height of the unfortunate Brutalist architectural movement.

The site is about 60-percent federally subsidized apartments. It has seen a string of homicides and is known in the area as “the crack stacks.”