How to Stop Dogs from Using Your Lawn as a Bathroom 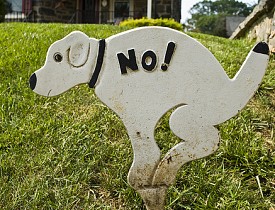 Solutions for dealing with the toilet habits of your neighbors' dogs have a lot to do with your personality. Are you the type to boldly confront people? Are you the “law and order” type who will go to any lengths to bring the culprit to justice with the local animal control officer? Maybe you don’t like confrontation so you try subversive ways of dealing with the problem. Or are you more likely to be proactive and make use of various types of barriers to prevent the dogs from ever coming into your yard in the first place? Here are a few ideas about how to deal with this messy issue.

If you can identify the owner of the dog, try to have a simple and polite conversation with him. Personally, I have rarely found this to work, but maybe you will have better luck than I’ve had. Generally, if people are letting their dogs run free or are “looking the other way” while on a walk, then they probably couldn't care less about the issue. Plus, depending on the neighbor, it could get ugly.

Yelling at people you catch in action can be effective – or get you in a fight, with someone who has a dog with them.

I did actually stop one boy from letting his dog poop on my tree belt. I photographed him and told him I was going to report him to the dog officer (we have a local ordinance with a $300 fine). I never saw him or his dog again.

In conversations with friends about the topic of owners not cleaning up after their dogs, I ran into some amazingly strong feelings on the subject. And while it ticks me off too, I don’t recommend shooting at the dog with anything other than perhaps a high-powered water gun. The dog is only doing what comes naturally; it’s not personal. I admit however, to being intrigued by the idea of shooting the dog with a paintball gun to be able to identify him to the dog officer.

Dogs are attracted to smells and surfaces that have the right “paw feel” when looking for a place to do their business.  If you also own a dog, other dogs will be attracted to your yard, drawn by both the smell and the intrinsic desire to “mark” a territory. Not only do you need to clean up really well after your own pet, you may need to use deterrent products around the perimeter of your yard.

There are numerous products on the market that come in the form of sprays, liquids, and granules. A popular product is called “Liquid Fence,” for example. Most products are non-toxic and biodegradable. Some have offensive odors to both dogs and people, while others have odors only offensive to dogs. You can also sprinkle chili powder or cayenne pepper around the edges of your yard. The catch is keeping up with consistent applications of whatever you are applying, such as after a rain.

There are “sonic” solutions that may work to keep dogs out of your yard. These machines may work, but they will keep other critters such as birds away as well.

Lastly, you can also fence off your yard. A no-cost DIY twig barrier might be enough to keep the local dogs off your garden or you may have to go whole hog and hire a fencing contractor. You will still need to regularly check the fence perimeter, as determined dogs will dig right under them.

A Great Contractor Will Guide You In Remodel Decisions That Work