Gardening: Can Urine Granules Keep Deer and Other Pests Away? 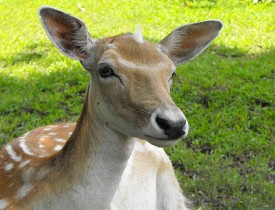 It's a simple theory. Scare prey animals -- such as deer -- away from your garden by spreading around predator animals' scents, in the form of urine granules. In reality, though, predator urine is only sometimes effective in keeping deer, rabbits and other pests out of the yard. If used properly, it may be an effective part of a garden pest control strategy, but it is not guaranteed to work.

Shake-Away and other companies sell concentrated coyote and fox urine granules, and offer long lists of testimonials from customers whose flowers and vegetables were saved by the power of pee. On the other hand, plenty of other frustrated gardeners swear urine granules have done nothing to reduce animal annoyances.

We've looked past the anecdotes to find the truth about urine granules as garden protection.

No long-term, definitive studies have been completed on urine granules, but smaller studies have shown them to be moderately effective. Colorado State University Cooperative Extension compared coyote urine to other commercial products and home remedies in repelling hungry, captive mule deer and elk. The study found concentrated urine to be more effective against deer than three other commercial products (Ro-Pel, Hinder and Thiram), as well as home concoctions of habanero peppers, Tabasco sauce, human hair and soap. The study suggests, "home-remedy repellents are questionable at best," and notes that deer were seen eating bars of soap hung as repellents.

Coyote urine has roughly equal power in repelling deer to concentrated Hot Sauce-brand repellent and Deer Away, an organic spray that contains about 5 percent fermented egg solids. Concentrated Hot Sauce-brand repellent was the only product that outperformed urine on elk. However, the study notes that no solution is as effective as a good fence, and a hungry deer (or other animal) might ignore all other repellents.

Other studies found similar results. A 1991 study in the Journal of Wildlife Management found highly concentrated coyote urine effectively repels mule deer, but only if alternate food is available. Another study from the Journal of Chemical Ecology found that urine granules are only really effective around plants that deer do not prefer to eat. For example, the study found the urine kept deer away from eastern hemlock, but not the apparently delectable Japanese yew.  As suggested in the studies, urine granules and other repellents should be used in conjunction with strategic plant selection.

Both these findings make sense. If a deer smells the corvine equivalent of a hot fudge sundae and doesn't see any other options, it is going to take its chances on outrunning a coyote with bladder issues.

How to use them

The studies don't offer a definitive endorsement of urine granules, but the granules are worth a try in a yard with animal problems. Be sure to use them according to package directions, and choose specific products for specific pests. Shake-Away sells 15 different formulations. Each deters a different animal, including a sprinkled mix of fox and coyote urine granules that keeps cats out of flower beds, and coyote urine granule packs that can be hung from trees at deer browsing height.

Experts also offer some other recommendations. Utah Cooperative Extension recommends reapplying the urine granules regularly, and rotating between a variety of repellents to keep out deer or whatever other animal is ravaging the garden. Its research suggests that deer and other animals can get used to any repellent and may start to ignore it.

Urine granules should also be used early in the growing season, right after you hire a landscaper to fill your garden with healthy, well-fertilized, carefully watered plants -- a more attractive option than most struggling wild plants. This is also when animals start to develop feeding patterns.

Again, the only surefire protection against most animals is a physical barrier. For deer, this means an 8-foot fence. For rabbits, voles and other animals, it might also include an underground barrier. Also keep in mind that coyote urine might attract coyotes looking for a mate.

And though humans may be predators, there is no evidence that urinating in the garden will deter any animals. The concentrations and pheromone levels are not high enough to be an effective repellent.