How to Control Garden Gophers

Gophers can be a serious threat in home gardens. They have a nasty reputation for pulling entire plants down from their roots and eating them. Even if your plants haven’t been pulled underground, you may be under gopher attack if you find damaged roots, bulbs, seeds and even broken pipes and cables. 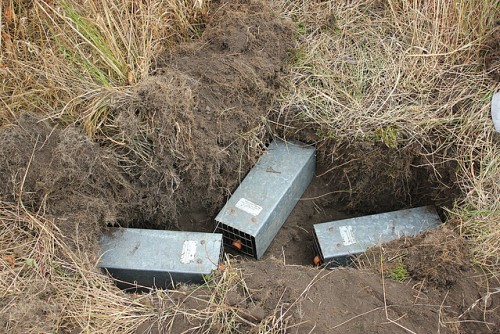 Gophers and moles should both be blocked and trapped, but methods vary. Also, several poisons are effective for gophers, but not for moles. Therefore, it’s important to differentiate the damage caused by these two animals, which tend to wreak havoc in the same areas.

Once gophers have been positively identified, the best way to prevent further damage is to erect gopher barriers, particularly for small vegetable gardens or other easily contained areas.

University of California Cooperative Extension experts recommend planting vegetables and other important plants in underground baskets made of chicken wire, to keep out gophers. Make the baskets large enough to accommodate expected root growth for the plant, and leave at least three inches of wire barrier above the surface.

Of course, you might not want to plant every specimen in the garden in wire mesh, so traps may be a more practical and effective way to get rid of gophers.

Try to mitigate gopher damage in the early spring, when they are becoming more active, and before they begin to reproduce.

Make sure to trap in active tunnels near fresh mounds. If you suspect gopher damage, keep a close eye out for new mounds. Then probe deeply around the mound, to a depth of at least 16 inches. In one direction, it will sink more quickly, indicating the gopher’s main tunnel, which is typically about the width of a tennis ball and 9 to 16 inches deep.

Set an adjacent pair of back-to-back traps and check them daily. A variety of commercial traps are available. Experts say they are similarly effective, but they must be set with extreme care to avoid injury.

Be sure to block any light around the traps, and to tie the traps to a stake or take another measure to keep gophers from dragging away the trap.

Several gopher poisons also are available. The most effective are strychnine and anticoagulant rat poisons. Both should be placed in the gopher tunnels to avoid killing pets and other animals.

There are advantages and disadvantages to each type of poison. Strychnine works quickly but also disintegrates quickly. This makes it less likely to kill non-target animals, but also less likely to kill other gophers later. On the other hand, anticoagulants take five to 10 days to kill a gopher, but will remain in the soil for several months. Consult a local pest control expert before setting out poison. Some poisons are only available via certified professionals.

Rex Marsh, a vertebrate pest control specialist at University of California Davis, has lab-tested popular folk remedies for gophers including chewing gum and chocolate laxatives. He said the gophers in his lab simply developed a sweet tooth, rather than being scared away or killed by these foods.

These methods might lead to fewer mounds and less visible gopher activity, but that doesn’t mean gophers aren’t still quietly eating roots and destroying your garden. To reliably prevent gopher damage, it’s crucial to block access to plants, or trap and poison the critters.

Steve Graham wrote this article for Networx.com. He is a handyman near Denver.