Training Your Cat to Use a Toilet 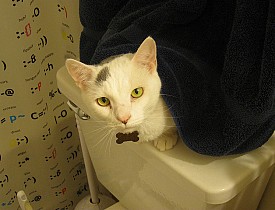 The thought of a feline urinating on a ceramic bowl generally reserved for the passing of human waste seems to conjure up endless gales of laughter among most individuals – both cat lovers and non.

Call it toilet humor if you like and throw in a joke or two about scatology if you feel so inclined, but for many cat lovers, teaching their four-legged friend how to use a toilet like us humans is serious business. "There are issues to consider when you have a kitty that uses a traditional litter box," says Richard Johnson, a cat owner who lives in Houston, Texas. "It’s important to stay on top of it constantly. That’s why I chose to toilet train my cat."

Feline fecal matter, especially when mixed with moisture from cat urine and traditional clay-based cat litter, can become a veritable breeding ground for bacteria. It’s easily tracked out of the litter box, throughout the house, and may ultimately be harmful to humans and other pets.

Depending on your individual cat, toilet training felines might be a breeze or a hellish, screeching, claw-fest nightmare. "My efforts attempting to train a mixed breed stray that I adopted after he showed up at my door one day was a miserable failure," recalls Montreal resident Thomas Monture. "I tried the method everyone suggested, but my cat Pierre just never really caught on. Perhaps he was too old, or maybe he just wasn’t clever enough. Every time we broached the subject it began and ended badly. Eventually, I just gave up."

Although Monture’s efforts with Pierre were a failure, that doesn’t have to be the case if you decide it’s time for your furry buddy to use indoor plumbing like the rest of the household. "Some cats just aren’t as smart as others," according to Deborah Tiganila, the owner and operator of Aristocat Bengal, a Bengal cattery and obedience school in Charlotte, N.C.

"It can be difficult if the cats aren’t bright, but I think any cat can eventually be taught to use a toilet instead of a litter box," says Tiganila, who once trained dogs for the CIA. She continues, "I use the same method to train the cats as I did with dogs. It is better to start young, but you want to avoid accidental falls into the toilet bowl." As with dogs, "You demonstrate and repeat. When they learn the behavior properly you reward them with a treat or a snack, just like you would a dog."

Tiganila concedes that the cats she specializes in – Bengals – have an advantage in the learning curve when it comes to toilet training. "In the wild, Bengals naturally gravitate towards water when they need to pass fluids or waste, because they want to hide their scent."

That would explain everything for another Charlotte resident, Shannon Eury, who adopted a stray Bengal kitten she found in her neighborhood. "I live in a house full of women, so we were constantly mystified as to why no one was flushing and there was urine in the toilet, but no tissue," she laughs. "Then one day we were in the living room and there was the sound of peeing coming from the downstairs half-bath underneath the stairwell."

After exploring the sound, she and her housemates discovered their adopted Bengal pal, Safari, squatting on the toilet urinating. "It was just about the funniest sight I’ve ever seen," she recalls. "We didn’t train him at all. He just picked it up on his own."

Tiganila opines, "It’s instinct. But with any cat, you have to take the time. Take them with you when you go to the restroom. They’re smart and they’ll figure it out. Let them sit in your lap. With Bengals, it’s hardly a challenge at all."

For less toilet-inclined kitties, there is a set procedure to follow. Start off by gradually moving their standard litter pan closer and closer to the toilet. Then it’s time to take the big step – shift their focus from the floor pan to the toilet bowl. Various kits are available. Most involve placing a shallow pan filled with litter between the toilet seat and the ceramic bowl rim. The amount of litter is gradually reduced until the pan is removed entirely and the cat becomes comfortable with the human john as its primary site for potty time.

"And for all cats, even teaching them to flush is pretty easy," says Tiganila. "They want to scratch and cover after they use the toilet, so you take that instinct and transfer it over to flushing. Just place their paw on the handle and push. It’s all repetition and continuity.

"After they learn it, though, you might want to keep an eye on them for awhile. I read a story about a couple who taught their cat how to use the toilet and then later couldn’t understand why their water bill had suddenly become so expensive. It turns out the cat was so entertained by flushing the toilet and watching the water swirl away, it spent most of the day doing just that while they were away at work."

If you choose to tackle the effort, the keys (in print, anyway) are simple: love, patience and consistency. All my best to you and your feline friend!