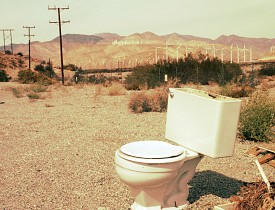 A toilet's flushing mechanism is one of the easiest house parts to love. It may look like a Rube Goldberg contraption, but it's really a simple system of reliable, inexpensive parts that anyone can adjust or easily replace. If you take a few minutes to understand the system and learn what each part does, you'll soon realize that what used to be considered a plumbing emergency is probably nothing more than your flushing mechanism crying out for attention. It just needs a little love to go right back to doing what it does best. In the meantime, if you need to clear the bowl before you start working, use the Bucket Flush technique described below.

How a Flushing Mechanism Works

A toilet's flush action is powered by three things: 1) water pressure, 2) gravity, and 3) you, the Flush Master. The big tank at the back is full of water, and it's elevated above the bowl. When the Flush Master activates the handle, it pulls on a chain inside the tank, which in turn lifts a little rubber trap door (called a flapper). This lets the water in the tank rush down through a big hole and into the bowl, creating the familiar swirling action and, ultimately, the flush that empties the bowl. When the tank is empty, the flapper drops back down over the hole. Meanwhile, a float that's attached to the flush-and-fill valve (also called a "ballcock") has dropped with the exiting water, triggering the valve to open and refill the tank. The float rides atop the rising water and shuts off the valve at the preset level.

Here are the most common causes and solutions with toilet flushing mechanisms. Keep in mind that most flusher parts cost well under $10, so don't spend a lot of time trying to repair old devices. Simply replace them yourself, or call a plumber to do it for you.

Sometimes flushing mechanisms don't play nice, and they decide to go on the fritz right after you've used the toilet. Here's how to handle the situation: Fill a bucket with 2 to 2 1/2 gallons of water (you might need less for a water-saver model), and pour it all straight down into the bowl, aiming at the hole in the bottom. Do this with confidence; it's the rush of water that creates the flushing action. The bowl will empty like it normally does at the end of the flush, but it might not refill, depending on your mechanical problem. The bucket flush won't hurt your toilet or plumbing, and you can do it as many times as needed until all is right with your flushing mechanism.