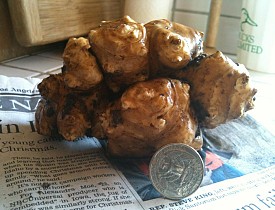 One of the least appreciated and perhaps most misunderstood food crops is the Jerusalem artichoke. Having nothing to do with either Jerusalem or artichokes, the plant is a North America native and, as indicated by its Latin name Helianthus tuberosus, it is very closely related to sunflowers. The roots are the edible part of the plant, having a crisp texture like jicama and a nutty, earthy flavor reminiscent of artichokes. They commonly grow of a similar size and appearance to ginger root, although there are less common varieties which grow in different shapes, colors and sizes. They can be eaten raw or cooked.

So where does the misnomer come from? According to Suzanne Ashworth in her classic seed-saving manual Seed to Seed, the name Jerusalem artichoke “is an etymological mystery.” She notes that it is a corruption of the Italian name for the plant 'girasole articocco' ('girasole,' which means sunflower in Italian, sounds like 'Jerusalem'). Because of the confusing name, some farmers market them as 'sunchokes.'

Growing Jerusalem Artichokes of Your Own

Jerusalem artichokes are very easy to grow. Because of this, they are good for marginal land from which you want to produce food. They don't require much care, just full sunlight and some rainfall from time to time, and they can produce a surprising amount of food. Just keep in mind that they grow tall (up to 12 feet) and will block morning sun from anything growing west or northwest of them.

You should be able to get a hold of Jerusalem artichoke tubers at your local grocery. For instance, they are sold at both Whole Foods and some of the small ethnic markets in Los Angeles. No need to worry about GMOs or anything either — Jerusalem artichokes are such an obscure crop they're not worth genetically modifying. The tubers you would find at the grocery store are sure to produce a good crop. You can also find rarer varieties through heirloom seed networks like Seed Savers Exchange (they offer over 100 heirloom varieties). Make sure your tubers are solid, fresh, and not moldy or soft.

Bury your seed tubers 3-4 inches deep underground. If you're planting them anytime in the next couple months (January, February), bury them, put some mulch on top, and leave them to sprout in the spring when it warms up. If you're planting in the spring, bury them and then water them in. Once sprouted, Jerusalem artichokes don't need much care. They will get by with rainwater in most regions.

It is common for Jerusalem artichoke to grow anywhere from 6 feet to 12 feet tall with 1-inch to 1.5-inch thick woody stalks. Shorter varieties averaging 3 feet are also available. They sprout abundant small yellow flowers at the end of their growing season, which is late summer. Because the stalks are so tall and spindly Jerusalem artichokes have a tendency to fall over, which is not necessarily a big deal since they'll still grow tubers. It is a big deal if you have them growing near other plants. My Jerusalem artichokes fell over on my tomato plants last summer which was not fun. I supported the plants from then on. I chopped down the stalks completely in October while the tubers remained in the soil.

Harvest time is anywhere from fall through early spring. You leave the tubers in the ground until you're ready to harvest them. They need not be harvested all at once — I like to harvest four or five tubers once or twice a week which is enough for a meal or two.

Once you remove the tubers from the soil they don't have a very long shelf life until they start to get soft (about three to four days at room temp—better to keep them refrigerated). If it snows where you live so it's inconvenient to leave them in the ground, another option is to harvest them and store them in soil or damp sand in a cellar. According to Seed to Seed they will keep for at least two months stored at 32-40 degrees and 90% humidity.

How to Cook Jerusalem Artichokes

Jerusalem artichokes can be used raw in salads, can be broiled, roasted, boiled, sauteed or cooked similar to potatoes. I usually slice them into quarter-inch slices and saute them in oil with a little salt and fresh ground pepper. For some specific recipe ideas, check out Native Harvests: American Indian Wild Foods and Recipes by E. Barrie Kavasch.

There are two aspects of Jerusalem artichokes that make them a bit notorious. The first is that they store their energy in the form of inulin, a carbohydrate which is difficult for humans to digest and so can produce cramps and gas when too much is eaten at once. However, there are also many health benefits attributed to a diet that includes inulin. The flatulence and cramps may be avoided if inulin-rich foods are introduced to the diet slowly at first.

The second aspect is that the plants can develop into a pest in the garden. It is almost impossible to harvest every tuber, as some are very small. They will not lose an opportunity to sprout again in the spring and they grow vigorously and can be difficult to eradicate once planted. However, planted in a marginal part of your garden, this shouldn't be a problem.