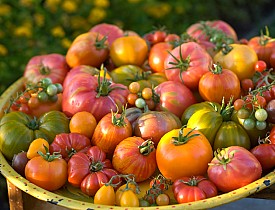 Heirlooms can be intimidating, but they absolutely should not be. According to Elana Havusha, an environmental educator and garden manager at Shemesh Organic Farm, an educational farm nestled in the hills of Malibu, CA, heirlooms have a mystique about them. “People are excited about the idea of purchasing heirlooms at farmers markets, for instance, but they sometimes hesitate to grow them themselves because they're not comfortable with the word. It sounds too fancy.” And fancier means finicky which means harder work. But, Ms. Havusha insists, this is patently untrue. “Heirlooms are not any more difficult to grow than hybrids, and in some cases are easier to grow because of their adaptation to a specific region's climate, whereas modern hybrids are more generalized.”

An heirloom plant is one that has been in cultivation for at least a century, but may also refer to more recent non-hybrid varieties developed from heirloom stock. The term applies to vegetables, herbs, flowers, and fruits. Some types of produce sold commercially are heirlooms, but more commonly what is available in the supermarket or in seed catalogs are recently developed hybrids, which work well on an industrial scale but can be a drawback for the home gardener. Oftentimes, modern varieties are bred for conformity and ability to withstand long transportation and storage (think about all those perfectly round, red tomatoes that taste like water) rather than flavor or other traits desired by the home gardener.

I propose four main reasons why you, as a home gardener, should love heirlooms. Here they are:

1. Heirlooms offer a diversity of experience.

In our supermarket culture, it's easy to forget how much diversity exists in nature. There are literally hundreds and thousands of varieties of apples, potatoes, squash, you name it. Many of those varieties can't stand up to the rigors commercialization, or they have some quality that makes them unmarketable. But what the supermarket can't sell you, you can easily grow in your own yard. In heirloom varieties, you can find different flavor profiles and interesting physical features. Ms. Havusha grew purple carrots this year. “Not only were they delicious, but in an educational garden, they were fun to harvest. It's especially exciting for the children to pull up a carrot and find that it's purple.”

Nothing can beat the taste of an heirloom tomato, especially those Green Zebras. Ms. Havusha is partial to Cherokee Purples. Another special heirloom she grew this year are Chioggia Guardsmark beets. “These beets were enormous, juicy, and beautiful. Their coloring is completely different from the standard beet and they have a different effect when cooked. The same old red beet just gets boring.”

2. Heirlooms are able to adapt and produce seed.

If a certain seed was passed down for a hundred and twenty years, there is a good reason for that. Heirloom plants are time-tested and hail from a time before chemical pesticides and fertilizers. In other words, unlike modern hybridized or genetically modified varieties bred to tolerate massive amounts of chemicals, these humble old varieties were bred to be stoic, to take a lickin' and keep on tickin'. During the Irish potato famine, it was the heirloom potato variety Garnet Chili that stood up to the potato blight.

Ms. Havusha mentioned that another problem with hybridized varieties is their inability to produce viable seeds. “Hybrids are amazing for commercial production on a massive scale, but they're one-time-use only.” This works out well for the companies producing those seeds because, since the farmer or gardener is not able to save his or her own seeds, it guarantees a return customer to the seed company. But heirlooms only exist by virtue of their ability to produce seeds (or in the case of some some plants, like apple trees, their ability to be propagated through grafting). With heirlooms, you hypothetically would only have to buy seeds once. You can save your own indefinitely after that.

Most fruits and vegetables grown commercially today are essentially genetically identical. This means if one is vulnerable to some new disease or pest, they all are. This is the type of farming practice that led to the Irish potato famine in the 19th century, and a corn blight in the United States in the 1970's which wiped out 15 percent of the U.S. corn crop. Heirlooms, by preserving genetic diversity, guarantee that there will be genetic stock to adapt to changing conditions or sudden diseases. This guarantees that in case of some agricultural catasrophe, which is not out of the question in this era of vast monocrop clone farms, heirlooms are our best bet for recovery.

However, many varieties are already lost forever and whatever secrets they may have held will never be known. Many countries have national collections of heirloom varieties, living museums of sorts and genetic reservoirs. The home gardener, by choosing to grow heirlooms, is helping secure the future of that particular crop. This is one area where one person can really make a difference.

4. Heirlooms are nostalgic, and you can't have too much nostalgia.

Heirlooms are folk plants. They're romantic. They connect us with the past. As Ms. Havusha put it, “It's like growing a little bit of history in your garden. These seeds were passed down through the generations, and you're becoming a part of that.” They stir up thoughts of someone's great grandmother journeying from the Old World with a stash of her favorite seeds in her pocket. And as you browse heirloom seed catalogs, many varieties have a story. Cherokee Trail of Tears beans were carried by the Cherokee on their death march from Georgia to Oklahoma. Thelma Sanders Sweet Potato (a type of squash) is a family heirloom from the Sanders family of Missouri. If a kitchen garden is reminiscent of the good old days, which I think it is, then an heirloom kitchen garden is an actual time machine.

If you are interested in learning more about heirloom varieties and purchasing seeds to start an heirloom garden of your own, check out Seed Savers Exchange.