Get Down With Rainwater Collection 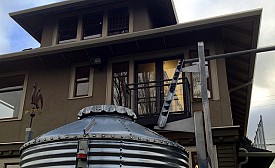 Right now, the wet stuff is pouring outside; it's raining so hard that it looks a lot like someone is sitting on a cloud and upending bathtubs over the side, watching the water cascade down in sheets. It's great for my garden and the well, but I can't help but think about all the water I'm wasting. In a drought-prone area like California, it pays to think ahead to when the water table is dipping low and the garden is withering away because I can't use up precious water keeping things alive. If I had a rainwater collection system, though, I could sustain myself and my garden through lean times -- and leap for joy on days like this one!

Texan Richard Heinichen has become a bit of a crusader for rainwater collection, and it makes sense. His home state shares some significant traits with California, including periodic extreme droughts that devastate crops, cause mass livestock deaths, and lead to significant hardships for residents. In the 1990s, he started building his own tanks, but he quickly branched out to create a business, supplying tanks to the community for residents who wanted to plan ahead for harsh times.

Rainwater collection tanks can be entirely self-sustaining, with a gravity feeding system collecting water from roofs and other catchment surfaces, and another system using the weight of the water to create pressure that will feed the water into the home or barn. Or, for that matter, garden. You can go small scale with rainwater collection barrels, or go for broke with a full-sized formal tank (which, incidentally, can meet the needs of a couple for a year if they're conservative with water).

Obviously, the more collection tanks you have, the better prepared you'll be for periods of limited water availability. You can also become independent from your well if you're having problems with brackish, sour, or contaminated water, which can be an issue in some regions. (Such as Ohio, where heavy fracking has damaged some water tables, creating problems with the water supply.)

Setting up a collection system is pretty easy -- here's a guide showing a rack of barrels that collects water from the gutter, and here's another with a large-scale tank on a platform also fed by gutters. However, there are some important precautions we want you to follow so you can stay safe!

Are you going to use your water for drinking or irrigation of edible produce? If so, you need to be concerned about water quality. Consider your catchment source carefully. Roofs, for example, are not very clean places, and you may need to install a washing system in addition to a basic filtration inlet (basically, a grate to keep debris out of your tank). It's a good idea to consider using a water filtration system with the rainwater you're collecting for drinking, and consider testing it for microorganisms periodically.

Also make sure to use a clean tank from a safe source. Tanks that have held hazardous chemicals, for example, are not a good choice for rainwater collection tanks, even if you can get them for free or at low cost. If you're recycling a tank (good choice!), confirm that you know where it came from and that its ownership can be traced.

Rainwater collection tanks get heavy. Before installing one on a roof or water tower, make sure the structure is sufficiently braced to handle the full weight of the tank. A gallon of water weighs roughly 8.3 pounds, so you can see how a tank's weight would get heavy fast. When you're setting up racks or platforms, use braces, concrete footers, and other measures to create a very stable, safe surface that isn't going anywhere, even as the collection containers get heavier or shift. If you need to, call a handyman to help you with the process of setting up the system.

This last isn't a safety precaution, but it's still important. Depending on where you live, plumbing in rainwater collection tanks may be restricted or outright banned, either by an HOA or city ordinance. Check to see if you're allowed to install a tank before you proceed. Many areas are still getting accustomed to green building and housing measures like rainwater collection, so it's possible that an outdated law could be challenged and struck down, but it might require a bit of a legal fight. You'll be far more successful if you're not a scofflaw: hold off on installing a tank until you can get legal permission.