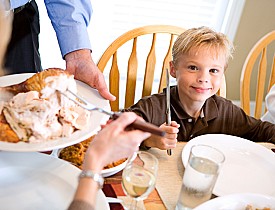 Among the major American holidays, Thanksgiving ranks first in several categories. It's the most widely celebrated holiday, it's the biggest travel time of the year, and it comes with the largest food bill of all regular events.

A somewhat lesser-known first is that Thanksgiving day is also the eve of the busiest day of the year for residential plumbers (and you thought Black Friday was just about retailers making lots of dough). This dubious distinction is perhaps not the best way to think of our most-beloved holiday, but if you've ever had your turkey dinner interrupted by the labored whine of a wet-dry vac, you know it's wise not to let your guard down.

Every Thanksgiving plumbing-related horror story involves clogs, clogs, and more clogs. You know that impossibly full feeling you get after Thanksgiving dinner, like the "couldn't eat another thing" guy in Monty Python's The Meaning of Life? That's what happens to countless drains some time over the four-day holiday each year. There are three main causes for this:

A houseful of guests is hell on a plumbing system. Besides the round-the-clock showering and constant toilet flushing, your house's plumbing is subject to people who don't know it very well (just as with cars and spouses, you get to know your plumbing and learn how to avoid problems). Often a combination of bad plumbing habits culminates in a perfect storm: Uncle Don's endless shower begins stressing the drain capacity just as Aunt Peg is flushing her cigarette butts, while the grandkids are washing Play-Doh down the kitchen sink. Even without a disaster like this, the additional load on the system means any lurking problem from before the holiday weekend, like a running toilet, will certainly come to the fore (or floor) in short order.

It seems most Thanksgiving plumbing emergencies are nothing more than a clogged kitchen drain. Of course, this alone can cripple an already over-stressed. highly dramatic meal preparation (if you've ever witnessed your mother swearing because someone has misplaced a certain baking dish, you're not alone). Time and again, the drain gets clogged with the same stuff: potato peels, celery, citrus rinds, fat and oil, turkey skin, and carrots. Sometimes it's turkey bones, but that's a real knucklehead move. Compounding the problem is the army of helpers in the kitchen, with each person doing their job and paying no attention to what's going down the drain or the fact that the disposal hasn't been run and is starting to look like a core sample from a landfill. And if the drain doesn't stop up the dinner preparations, there's always the cleanup. The solution here is simple: Put all food scraps into the trash or compost bin, and run the water frequently to clear the drain.

This horrible phenomenon needs no explanation. And you know it's real.

As the family handyman, I have more than once waltzed upstairs --showered and well-dressed for the big meal -- only to discover that the rest of the family is waiting for me to auger the kitchen drain or figure out what happened with the powder room toilet. And in the interest of fairness, I'd like to share a legendary Thanksgiving emergency involving not me, as it happens, but my wife's family (sorry, Dear; I have to do it):

The family was hosting out-of-town friends for the holiday weekend soon after moving into their newly built home. All had gathered for the big meal, toasts were made in honor of the gracious hosts and their beautiful new house, and everything was going swimmingly. What no one knew was that the plumber who worked on the house failed to solvent-glue the plastic drain parts serving the guest room toilet. Applying Murphy's Law to this scenario, you can imagine the result. And guess where the problem revealed itself? In the linen closet directly below the guest room. Not surprisingly, the same words used to describe the mess in the closet were repeated with great frequency during the father's phone call to the plumber.

An Ounce of Prevention...

So, to prevent your own plumbing emergency this Thanksgiving, remember to treat your drains with respect, keep a sharp eye on "helpers" in the kitchen, and hope that your home's building inspector noticed any suspicious absences of glue. And as for the dedicated plumbers out there who will be on call for Black Friday, at least you'll have some extra cash for your Christmas fund. You certainly deserve it.