How the Pros Clear a Clog 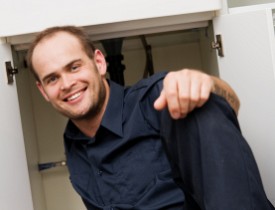 "Sometimes you can't make it on your own," sings the band U2. I was convinced I could clear a bathroom drain. My wife was convinced we needed to call a plumber. She won - eventually. The plumber cleared the clog, but I learned how to clear stubborn clogs with a $12 power tool.

Learn from My Mistakes

I have what some might call robust facial hair growth, and my wife has long, thick hair. It's a drain-clogging combination that has caused problems before, but nothing that a plunger or commercial drain cleaner could not fix.

Two months ago, the drain started to have issues, although it never completely stopped working. Nothing seemed amiss after washing my hands to the tune of "Happy Birthday" (a recital takes roughly 20 seconds, the amount of time recommended by the Centers for Disease Control for proper hand washing). Only after a longer and heavier flow of water did the sink start to fill with water, then drain very slowly.

I thought it was a minor clog that a plunger could fix, but the plunger did nothing. I also struck out with a pot of boiling water, which can normally be quite effective. Time for the heavy arsenal: Against my better tree-hugger judgment, I poured a bottle of drain cleaner down the sink. Again, it did nothing.

Another Reason Not to Use Drain Cleaner

Since then, I found an official Environmental Protection Agency warning about the environmental impact of drain cleaners. The cleaners can kill off beneficial bacteria and poison waterways.

Moreover, the caustic cleaners are unhealthy, they can eat away at pipes while eating away at clogged hair, and they don't work on some clogs, as I discovered. As an alternative, the EPA suggests "one-half cup of white vinegar followed by one handful of baking soda instead of drain cleaners." This link also has a list of reliable homemade cleaners, as well as other ways to reduce waste.

The next stop was the neighborhood hardware store for a manual drain auger (or snake). After a few frustrating attempts and much coiling of the snake in the drain, I still couldn't reach the clog.

The smell of the open under-sink pipes convinced my wife we had to call a plumber. After about an hour of indoor work, the acrophobic plumber had to attack the problem from the roof vent. He stepped it up to a power snake, which did the trick.

A power snake, which costs about $12, attaches to a power drill and slowly twists down the drain to clear stubborn clogs. The clog was under the house and past the length of my hand snake. Using the power snake from the sink wouldn't have worked either, because it was likely to head toward the drain vent rather than the clog running down the pipe.

Final Tip: Listen to Your Wife

I learned that with some finesse and a powerful drill, a power auger can clear a clog quite far down the line. And I learned that my wife might be right once in a while.