How Much Power Will a Residential Wind Turbine Produce? 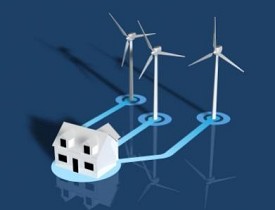 Thinking of going off-grid and generating your own residential wind power? Several factors – both mechanical and natural – will affect the amount of power generated by a home wind turbine. Homeowners should avoid general ratings and carefully study the potential power-generating capacity of a wind turbine on a specific site.

Most turbines have a power rating in kilowatts (kW). The rating is somewhat like a car's horsepower figure. It shows which engine or turbine is bigger, but isn't a direct measure of the machine's full energy output. The number of "horses under the hood" doesn't indicate the fuel efficiency or top speed without vehicle weight, driving conditions, and other stats. At least most car buyers have already owned a car, so they have a rough idea how to translate horsepower figures. However, homeowners are typically buying their first turbine, so they have no basis for comparison.

Utility bills are measured in kilowatt-hours (kWh) -- power usage multiplied by time. For example, a 100-watt light bulb left on for 10 hours uses one kWh. Although many companies and industry groups say a 10 kW system will generate about 10,000 kWh per year (equaling the average power usage in a U.S. home), the real output will be higher or significantly lower. The turbine puts out a maximum of 10 kW under perfect conditions, so it could theoretically generate 10 kW for 24 hours a day 365 days a year, or 87,600 kW per year. With only soft breezes, it will generate just a handful of watts.

Calculating the real power output of a wind turbine in watts involves multiplying the mechanical efficiency by the wind speed, air density, and rotor blade length.

Wind speeds and other weather factors make a bigger difference to power output than a turbine's parts. This U.S. Department of Energy map shows annual average wind speeds at 50 meters above the ground. Residential wind turbines have been installed in most U.S. states, but many areas do not have enough wind to spin turbines. No matter what the installer or manufacturer says, you won't generate significant power at speeds below 10 miles per hour.

Above that threshold, energy increases exponentially with speed. A site with 12 mph winds can generate 70 percent more energy than a site with 10 mph winds.

Wind speeds also increase quickly with altitude. A 10 kW turbine generates 30 percent more power on a 100-foot tower than a 60-foot tower. The difference is greater if tall trees or structures block the wind or create turbulence.

Most turbines automatically shut down when wind speeds rise above 25 mph to avoid mechanical damage or bodily injuries. A relatively calm area with seasonal windstorms may never generate much wind capacity.

Another major consideration is the size of the turbine's rotor blade. Like wind speed, a larger blade will generate exponentially more energy. A 10-foot blade may not look much larger than an 8-foot blade, but the "swept area" is 58 percent larger. That corresponds with a 58-percent increase in energy production per blade rotation.

The other parts of the turbine differ in quality more than output. Look for a reputable manufacturer with quality parts and avoid extreme claims of power production.

Consult a licensed electrician for more information about efficient energy use.