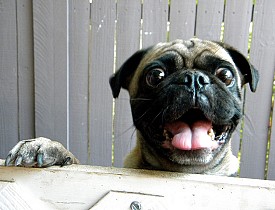 Ever wonder why funny pictures of dogs and their companionship can make us so happy? According to the book 100 Simple Secrets: Why Dogs Make Us Happy (David Niven, PhD, Harper Collins, $11.95), there are a number of reasons we enjoy their companionship.

Dogs can promote better health and well-being by getting us out and moving around when we take them for walks or out to play. (What better motivation to hire a landscaper than to have a nice place to play with your dog?) They can facilitate better communications between humans simply by their presence. Who’s not drawn to a cute dog? That might lead to a new human acquaintance, friend or even a potential romantic partner.

Another bonus: our canine friends want to make us happy. They are attuned to certain cues and quick to respond because they enjoy our positive responses. In other words, there’s more than just a little bit of us in them than we may realize. That’s probably why so many of their various comedic antics can conjure up instant laughter.

After digging through an endless array of Facebook photo files and talking with various friends and acquaintances about their doggie pals, here are my personal favorite funny pictures of dogs. 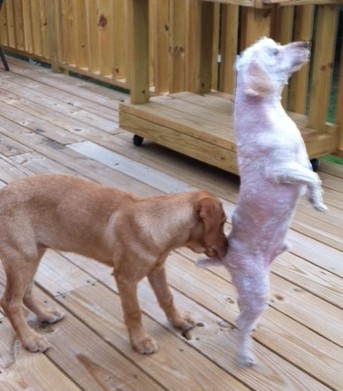 "BeBe is a red lab," says Ellen Howle.  "She smells everything. Spray Lysol and her nose is right there. No matter how strong the smell, BeBe will smell it. Scrub the floor with bleach? She will put her nose right into the bucket. She will smell anything. Including our other dog Archie’s butt." 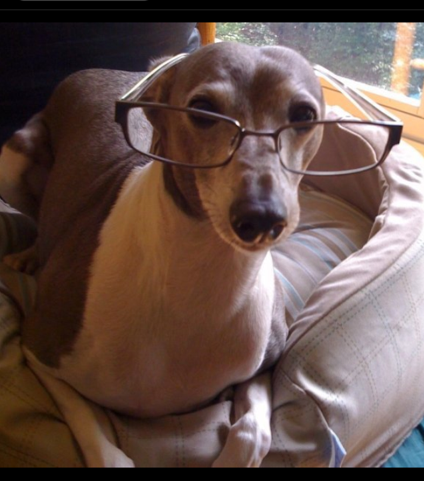 Steve Richardson shares a strong bond with his Italian Greyhound Canoli. "He’s very inquisitive," says Richardson. "It can make for great friendships with an occasional permissive kitty, or a bloody nose. He never really seems to mind the latter, though."

"The way he recognizes certain words or sounds amazes me…especially if he hears the crackle of a candy wrapper being opened. He has honed his listening skills so well, that we can’t even spell out the word ‘treat.’ We’re working on his reading skills next." 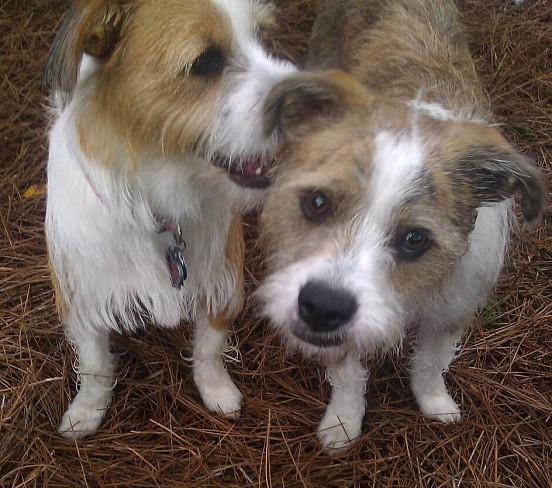 "We called this picture ‘telling secrets,’ because Charlotte appears to be whispering in Dexter’s ear her plans for getting into some kind of mischief," Susan Jordan Adams says about her Terrier-mix duo. "She is the instigator and he is always a neurotic mess when things go awry. I’m happy and lucky — both dogs were rescues and were adopted by my family as a Christmas gift to me." 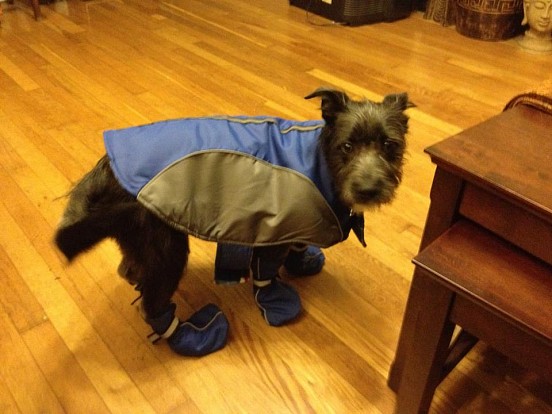 Cam Lindquist’s dog Emerson is a Schnauzer-Scottish Terrier mix he adopted from a pet rescue agency.

"He’s seven months old," says Lindquist. He loves riding in cars, but he is afraid of my housemate’s mean cat. Other than that, he’s pretty fearless. He does hate walking in saturated wet grass after it rains, which is why I put the boots on him. He didn’t like it at first but when he realized what it was for, he got relatively comfortable with them. When it’s warmer, we lose the coat." 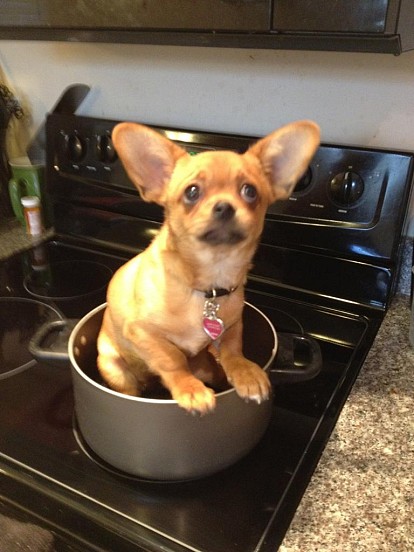 Jamie Court’s Pekinese-Chihuahua mix Juliette apparently thinks she is the princess of everything. "She won’t go to the bathroom without a treat and she won’t sleep in her kennel unless it’s covered like a birdcage," a friend says. Court is quick to concur.

"She’s an absolute diva. She’s convinced everyone on the earth should love her!" On the other hand, Court also sees a softer side to Juliette. "She loves every person she meets and she always enjoys sitting on my lap. She’s very cuddly." As far as other dogs go, however, Court admits there are some challenges. "She tolerates them." 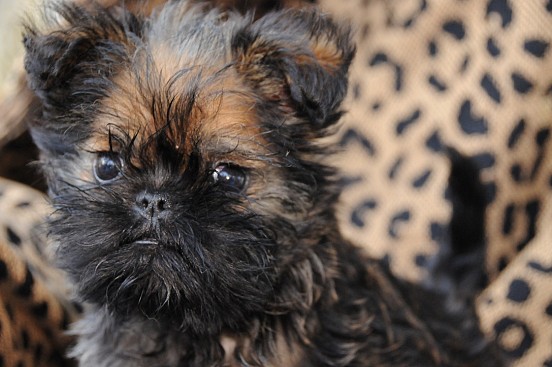 Toni Davis’s unusual pup Lucy Loo, is a breed known as an Affenpinscher. They’re known for being loyal, intelligent and straightforward. "She’s a very funny little dog," says Davis. "She seems to have no fear of heights and a memory like an elephant. She remembers everything!

"Her face is a riot," Davis adds. And she burps like a person." What more could you ask for? 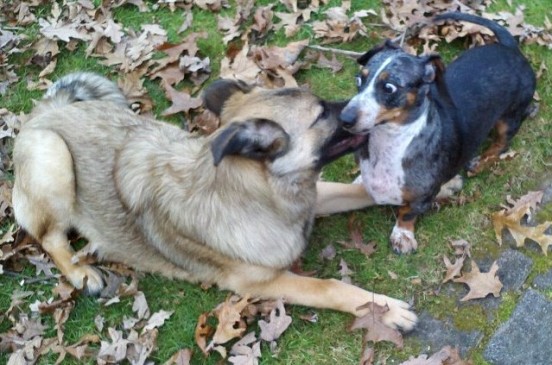 Riggs is a Norwegian Elkhound that lives with Brian Mawry. Marlin is a blue-dapple mini dachshund that resides with Brian’s brother Steve. Apparently, when the two get together, it’s non-stop comedic action.

"Marlin was two years old and Riggs was just four months when this picture was taken," Steve Mawry recalls. They had already spent a lot of time playing together and Marlin had finally reached the point where he was ready to take a break."

Riggs, however, just couldn’t seem to take a hint. "He would flop on his back and paw and drag himself over to Marlin," says Steve. By that time Marlin would just turn his back and walk away. They’re a very funny pair." 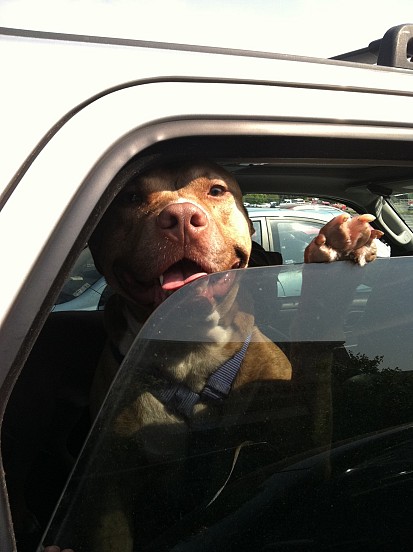 Kellee Beard’s pit bull mix Rocky is known to be a comedic troublemaker.  "We named him Rocky because he's a lover and a fighter," says Beard. "His favorite pastimes are cuddling and trying to steal our attention away from his brother Max, but he is one of the cuddliest dogs I've ever known."

Beard says she and her significant other adopted the pooch from a foster home that found him wandering the asphalt and concrete of Brooklyn. Guess that gives Rocky his irresistible charm: street cred mixed with a heart of gold.

David Aaron Moore wrote this for Networx. Get home, gardening and pets ideas like this on Networx.