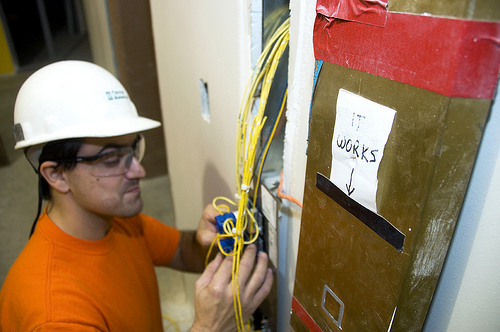 Photo of an electrical install for remodel by OregonDOT/Flickr Creative Commons.

Despite how mysterious and dangerous electrical work may seem, it's often one of the simpler aspects of home remodeling. In essence, an electrical system is just a bunch of wires snaking through the house's structure, connecting at one end to fixtures, receptacles (outlets) and switches and at the other end to the breaker box. And unlike plumbing drains and structural assemblies like walls and roofs, wiring is flexible, in more ways than just being bendy. One thing about electrical installation that's not flexible is the local building code. It must be followed to the letter, whether you're adding an outlet to your workshop, in the process of determining a dishwasher installation cost, or completely renovating your kitchen.

New Work vs. Old Work
Electrical installation often is characterized in one of two ways: new work, or new construction, and old work, or remodeling. The main difference is that with new work the framing is exposed, so it's much easier to install things like boxes and wiring, while old work requires surgical cuts in drywall and drilling through framing with special bits to minimize the amount of patching required. Additions and major remodels can involve a lot of new work because old walls are being removed, new ones are being framed or things are generally torn up anyway.

At your local home center you'll find "new work" and "old work" electrical boxes. The latter have clever features like little clamping ears that allow you to mount the box just the to drywall; you don’t have to fasten it to the framing (although this is subject to weight maximums and other requirements). Old work devices are extremely handy for small DIY jobs like adding a light fixture, but pros use them, too, to minimize disruption of existing wall and ceiling finishes.

To Rewire or Not to Rewire
The question of whether you should rewire part of all of your electrical system during a remodel is a big one that certainly can't be answered here. But there are some basic considerations that are sure to come up. The main thing to assess is the condition and capacity of your current system. If you have a fuse box (as opposed to a modern breaker system) or your household electrical service is anything less than 100 amps, you should upgrade to a new service panel (breaker box) with 150- or 200-amp service, preferable with the help of a quality electrician. This doesn't mean you have to rewire the whole house, nor does it mean you'll use more electricity. It means you'll have a safer system that can accommodate the added demands of your remodeled space and make it much easier and safer to add circuits or rewire any part of your old system in the future.

Old circuit cables that don't include a ground conductor do present some safety risks, particularly if the original installation of the cabling or electrical devices was less than perfect. If you're not ready for a whole-house rewire, it's possible to update old circuits a la carte (that is, rewire some and not others), based on their condition and their intended use; this is something to discuss with your electrician, general contractor or building inspector. In any case, be aware that all new electrical installations must be completely up to date, as prescribed by local code.

Following Code = Safe Abode
That's all that needs to be said about electrical safety; you've heard it already. So let's talk about installation of electrical equipment when remodeling. Most local code authorities will let you replace an existing light fixture, receptacle or switch without filing a permit, but that's about it. Adding a new circuit or even extending (tapping into) an existing circuit likely requires a permit and inspection.

Many remodels involve adding new electrical circuits, and that's a good thing all around (except for the money part) because new circuits improve safety and convenience. For example, an old bathroom might have one or two standard outlets into which you plug a curling iron, hair dryer, shaver charger and night-light. If you're using the hair dryer and it shorts out, your hair might dry to a crispy frizz, or you might get electrocuted and won't have to care what your hair looks like. A remodeled bathroom will have a nice, new 20-amp circuit to provide plenty of power for your beauty needs, and all of the outlets will be GFCI (ground-fault circuit interrupter) protected, to help prevent short-circuiting your life. Being able to advise you with this is one of the qualities of a good electrician that you should be cognizant of.

Take Charge
As mentioned earlier, electrical systems are relatively flexible, and electricians have all sorts of tricks and techniques for running new wiring and adding devices without tearing up your house. So don't be afraid to address the wiring questions. And don't think that cutting corners will save you much money. Now is the best time to ask yourself, “Where can I find electrical contractors near me?” because proper electrical installations don't necessarily take significantly longer or cost more than shoddy work. Where you pay extra with the latter is in lack of peace of mind, compromised safety and performance and, possibly, legal problems down the road.

Electrician Restarted The Lights In My Outdoor Kitchen