How Many Solar Panels Does it Take to Power a House? 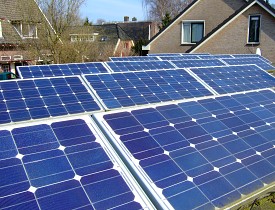 While many factors are involved in determining how many solar panels are needed to power your home, there is a basic formula. Gregg Garrison, general manager of Northeast Solar in Hatfield, MA, gave some guidelines for the average homeowner regarding the number of panels to power both electrical and hot water requirements.

How many solar panels to supply an average household?

Garrison stated that the typical home is approximately 1,500 square feet, with electrical costs of about $100 per month. Such a house generally needs about 16 panels to completely cover electrical power needs.

If you are looking to heat water for the average family of four, two solar thermal panels would be needed, Garrison explained. “The average hot water consumption is offset by about 70 percent.”

What’s the difference between photovoltaic panels and solar thermal panels?

The cells in photovoltaic panels generate electrical power by converting solar radiation (sunlight) into an electrical current. Photovoltaic (PV) cells are made of a variety of materials that include several types of silicon, arsenic and selenium.

What affects the number of solar panels necessary to power your house?

Depending on what direction your house is situated – north/south or east/west, you will have more or less sunshine available to you to convert into solar power. The other primary factor is how much shade your home receives.

Contact a professional for an assessment of your home. They'll utilize technology such as a Solar Pathfinder to measure how much sun your home receives in a year, which in turn reveals how much power you could generate. They will also use a special device to measure shade and solar access. “Once we have gathered all the information, we download it into a program that gives us a more accurate measure of electrical savings and output,” disclosed Garrison.

How does the number of panels affect “payback?”

In general, for the average home (and 16 panels), it takes about six to eight years to pay back the cost of installation, according to Garrison. In addition, some power companies allow you to contract to sell excess power to be fed back into the general grid, saving you even more money over time.

But the panels themselves are the most inexpensive part. The cost for the components of the solar system, like inverters, wiring, and mounts, can be $6,500 on average. You also need to factor in the fees for installation, permits, and inspections. The average homeowner will pay between $2,000 and $5,000 to install an appropriate solar panel system which includes permits and inspections.

If your home is especially shady and you aren’t willing to take down the surrounding trees, it can take nearly double the time for payback. “Any shading on the roof reduces the amount of production,” Garrison warns.

Keep in mind, most solar panel systems are estimated to last about 25 to 30 years. Garrison remarked, “Gas, oil, and electric aren’t giving you a payback. Households using solar panels (for power) are able to stabilize long-term energy costs. You won’t be hit by the fluctuations in the energy market.”

A note about government incentives

Currently, homeowners can take advantage of a variety of federal and state incentives to repay part of the system's cost. Federal incentives for solar energy have been extended through December 31, 2021, on a gradual step-down basis.