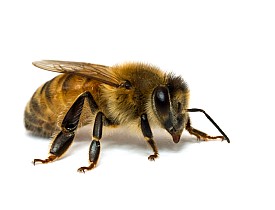 More and more people are keeping bees as much for their honey as their pollinating abilities. However, beekeeping is also as much a science as it is an art, as the hive's well-being can change from year to year.

Surprisingly, it doesn't take much to start a bee colony. First, if you can afford the cost of a complete bee suit, buy one. As you become more confident in working with bees, you can opt for more comfortable clothing that includes a bee veil, hat, gloves, heavy long-sleeved shirt, heavy long pants, and boots. Honey bees will crawl and usually find any opening in clothing you are wearing, so always tuck pant legs into the top of socks and shirts into gloves. Most often, honey bees climb up the inside of the pant leg.

You will also need a smoker and a hive tool. The smoker is a device for creating puffs of smoke that calm the bees and reduce their tendency to be aggressive. Smokers come in a variety of sizes and prices, but as beginners who might start with two colonies, the smallest and cheapest will work just fine.

You will also need a hive tool to pry open the hive and remove frames. You can buy a proper hive tool, which is like a small pry bar, or use something as simple as a screwdriver or paint scraper. This tool is crucial for separating hive parts like frames of honey, which are stuck together with a resinous substance called propolis, or bee glue.

Parts of a Beehive

Next comes the beehive, which consists of supers, covers, bottom board, frames, and a foundation. The supers, also called hive bodies, are basically wooden boxes without tops or bottoms that are stacked on top of the bottom board and each other to create the hive. A flat piece of wood called an inner cover is placed on top of the uppermost super to close it up, and an outer cover is placed atop the entire hive to make it weather tight. Then ten rectangular wooden frames are inserted into each super and are used to hold sheets of beeswax called foundation. This foundation gives the bees a place to build their wax combs neatly into each frame so the frames can also be removed to harvest honey.

Exactly how many supers you will need for each hive depends on where you live and how severe the winters are. In Ohio, for example, the general practice is to use two deep supers for the bees to live in, and three shallow supers per hive to collect the honey. In more tropical areas, you may only need one deep super.

If possible, buy your bees locally so they don't have to incur the trauma and unforeseen risks of being transported long distances. In the same light if ordering through the mail, order as close to your own vicinity as possible. This gives them the best chance of arriving healthy. Contact your local beekeepers association for information about where to buy bees locally.

As for quantities, a three-pound package with one queen per hive will get you off to a good start. This should be purchased in January or February to be assured deliver by spring, which is the best time to start your colony.

Starting in the spring, give the bees plenty of time to get established in their new home, and to feed on surrounding nectar from trees and plants so they can adequately build up their population to make it through the winter.

Honey bees can thrive almost anywhere in the United States. They are social and depend on each other for survival. Each colony is mostly made up of workers bees that are sexually underdeveloped females. There are also some drone bees whose sole function is to mate with the colony's queen.

Worker bees collect food and water for the colony, build wax comb, do the housework, maintain the interior temperatures of the hive and guard the hive against intruders with their stingers. Under certain conditions, female worker bees can lay eggs, but because they are not mated, they produce eggs that only develop into drones.

The queen is a mature female that can lay over 2000 eggs in a single day. This torpedo-shaped bee is not only the largest of all the bees, but also can live the longest (up to 5 years). She does have a stinger, but typically only uses it to kill other queens.

Honey bees need shelter, nectar, pollen, propolis, and water to survive and thrive. The shelters can be built or bought, while the other elements found in plants, flowers, trees, shrubs and fresh water sources must be located nearby.

Nectar is a sugary liquid substance produced by flowers, and without it bees cannot make honey. When establishing a new hive you may have to supplement nectar with manmade sugar-water.

Pollen is accumulated in pollen baskets on the bee's legs and carried back to the hive. After worker bees convert it using enzymes, it becomes food for the young larvae.

Propolis, mentioned earlier, is used to cement holes and cracks in their hive and is gathered from secretions in trees and shrubs.

Finally, water is essential to the colony's survival. If the hive cannot be located near a good water source, the beekeeper should provide one.

Honey can be removed from a hive almost anytime provided that the honey is fully capped over, meaning that at least 7/8 of the frame has wax covering the cells holding honey. Unripe honey (honey in cells not capped over), has too much moisture in it and will spoil.

These are simply a few basics to get you started beekeeping your own colony. You will also have to learn how to winter your hive as well as protect them from intruders like mice and mites.