What Would Happen if the Globe Used AC Like We Do? 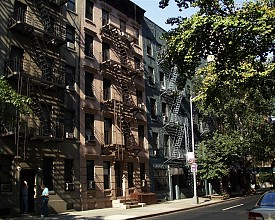 It's summer, and those air conditioners (central and window-mounted alike) are chugging away ferociously to beat the heat in the United States. No wonder, with the weather being hot and sticky in many US cities (notorious heat sinks thanks to all the pavement) as well as outlying areas. The only way to get comfortable enough to work or sleep, it seems like, is to run the AC.

Which is why the United States is the world's leading user of electricity for air conditioning systems. In fact, the energy we use beats out all other countries combined, which is a sobering and depressing statistic. The United States Energy Information Administration estimates that 87% of US households use air conditioning, which adds up to quite an electric bill for many people living in hot regions like the US South, Southwest, Northeast, and Midwest, where sweltering cities like Chicago need air conditing services every summer.

Climate advocates and researchers are starting to get worried about what might happen as countries in the global south start adopting air conditioning. As the level of income and standard of living rise in nations like China and India, more residents are and will be buying air conditioners to manage the temperature in their homes. Particularly in hot, crowded cities like Mumbai, where the heat may have been managed for hundreds of years via a variety of other tactics, but the temptation of air conditioning will probably prove to be too much.

Consequently, we may see a spike in global energy use as air conditioners crowd the windows and homes of people all over the world; the US is certainly unlikely to retain the dubious honor of using more energy on air conditioning than the rest of the world for much longer. In fact, Mumbai alone could use as much as 25% of the energy the US uses just to cool itself. That's a single Indian city!

There's another problem with all that energy use: in addition to putting serious pressure on an already tight energy supply, it's going to a use that could contribute to even more environmental problems. Air conditioning units vent out warm air, which serves to make the environment around them even hotter, as you may have noticed if you've ever walked by an AC exhaust vent on a hot day. Using energy to cool hot air and then produce air that's even hotter is not a very effective use of resources.

The air conditioning dilemma is a potentially big issue that may require some serious reevaluation to resolve. Ideally, alteratives to air conditioning, such as better home design, thoughtful remodeling, the use of fans and swamp coolers, dressing in summer-appropriate clothes, and limiting activity during the heat of the day, could help reduce the amount of energy use associated with air conditioning. Americans may also need to rethink their preferred temperatures in the summer heat; while it can be nice to crank the AC down low and bask in the breath of cool air, a higher temperature will be more comfortable, and use much less energy. There are also some more efficient and environmentally-friendly ways to use air conditioning to consider when a unit absolutely must be used.