Vegetables are a great source of nutrition, but who knew they could be a source of fun as well! Check out our gallery of legendary giant home-grown vegetables to see just how far some expert gardeners are willing to go to break records and produce ridiculously large, natural food. 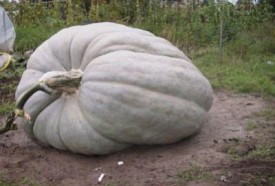 You'd better watch out or this gourd might squash you! At a hefty 1,234 pounds, this squash made it into the Guinness Book of Records in 2007. It beat the previous world record by 103 lbs. Dutch gardener Brad Wursten had to use a crane to put his massive squash on display. Jane Hunt holds the Canadian record for largest home-grown watermelon with the above giant weighing in at 207.6 lb. And this watermelon sure drank a lot of water to reach its impressive size. Jane started out watering it with only one gallon daily, but by the peak growing time she was dishing out 5 to 8 gallons per day! 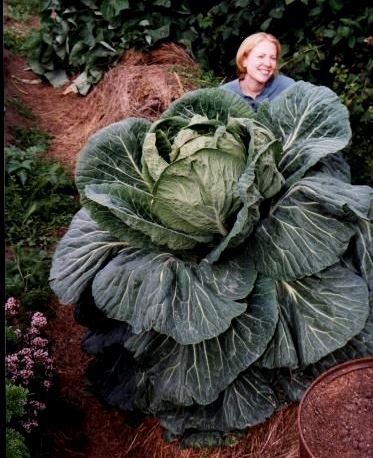 Caught in a Cabbage

This photo might look like a scene out of Alice in Wonderland, but that is actually Lauren Evans being dwarfed by her father's prized giant green cabbage! John Evans has over 40 years of gardening experience and comes from a line of expert horticulturists. He and his wife, Mary, have accumulated more than 180 first places in the Alaska State Fair competitions in both quality and giant vegetable categories, and also held 18 state and 7 world records. 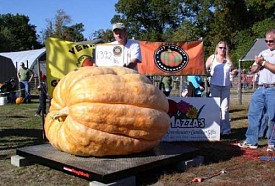 The Vermont Giant Vegetable Growers Association had some fun with these ridiculously large pumpkins in 2008. The trio of oversized pumpkins were grown by Mark Breznick and won multiple awards at several different weigh-offs.They were creatively carved by Mark and his wife, Sharon. 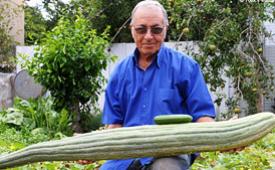 Pickles, anyone? Yitzhak Yizdanpana poses proudly with his massive 1.2 meter cucumber. He says he did not use fertilizer or other soil additives to reap this beauty and the crazy thing is that the unstoppable vegetable was still growing at 2 cm per week, as of July 8! The previous world record for the longest cucumber was 91 cm. Great job, Yitzhak! 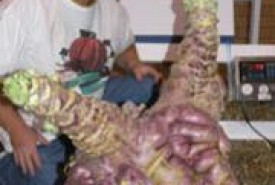 Norm Craven kneels proudly behind his 77.8 lb rutabaga here at the 2008 Royal Agricultural Winter Fair in Toronto. The huge root set a new world record and is decidedly larger than a regular rutabaga, which usually grows to be about fist-size. 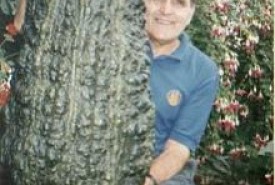 Bernard Lavery is pictured here cradling his record 108.2 lb marrow. This is a vegetable commonly grown in Britain and is considered part of the autumn squash family. Bernard is known for growing hugely oversized plants and vegetables and has held the record for the largest marrow since 1990.