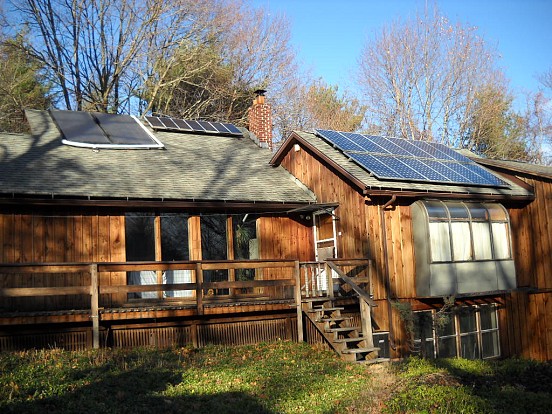 As a young man, John Howard of South Hadley, MA joined the Peace Corps. Howard's experience of how the most commonplace items were used to their utmost in an impoverished country changed how he would later build his own home.

"When I was in India in the 1960's, when you were finished with a can or a bottle, you could sell it for real money," said Howard. "When I came home, throwing something as simple as a can away became very hard."

Twenty-eight years ago, Howard began the creation of his home, which has become a model of sustainability and simple beauty.

During a green building tour sponsored by the Northeast Sustainable Energy Association, Howard got to show off his labor of love. The majority of Howard's 1,600 square-foot home is constructed of reclaimed materials. Some materials he was able to reuse after tearing down the original house on his property. Other materials, such as leaded glass windows and high-quality woods, were purchased from Mt. Holyoke College, where he has worked for over 33 years. Schools and other organizations often have any number of leftover materials when they have gone through renovations. "They (the college) had a huge room full of just old doors. I bought a bunch for $200; they threw the rest away," said Howard.

For example, Howard took an old transom he purchased from the college and used the wood to build his kitchen cabinets. "You can save an awful lot of money this way and end up with a nicely styled house," said Howard who also likes to joke about his "thrifty Scottish ways. I wanted the look of an old cottage, but with good plumbing and nice floors," he said.

Howard ended up with an especially old "reclaimed" material when his basement was being excavated – fossilized dinosaur tracks. Howard took blocks of stone with the six-inch long raised tracks and embedded them in the stone pad for his woodstove. 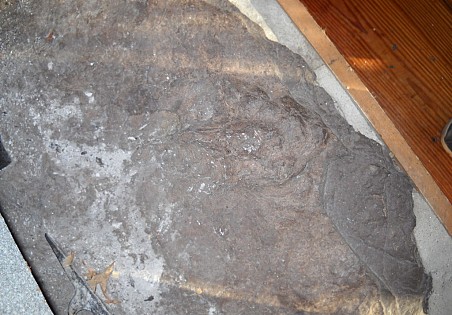 The placement of where your home is plays a large part in how well you can use solar-powered techniques for generating energy and saving money. The first, most simple thing a person could do, Howard said, is to make sure what you are constructing can capture a lot of sun. While that may seem obvious, any construction, especially in rocky, well-forested New England can take some planning. Howard has installed large windows in the majority of his south-facing walls for the passive solar effect. "That alone accounts for a lot of the heat in my home," said Howard. "My furnace almost never goes on. And if I make a mistake and leave the woodstove on during a sunny day, I have to open a door," he added.

If you are working on having south-facing windows in your home, it's good to remember that magnetic south (detected with a compass) is different from solar south. "Magnetic south can be off by 12 to 15 degrees," said Howard. He suggests placing a stick outside your property at noon and tracking the shadow to find solar south. "That's where you want to put your windows," he said.

However, the real power source in Howard's home is a large array of photovoltaic panels. Howard's panels are reaching the latter part of their 25-year estimated life, but are still working just fine. "They are just a little weaker, but they still charge the 12-volt batteries I keep in my basement," Howard said. The batteries run a range of items in Howard's home including power tools, computer, and his home alarm system. Over time, his photovoltaic system has cost Howard approximately $10,000, given government rebates.

Howard laments the fact that his community is not one of the many towns world-wide that make use of home-produced electricity, not only using the electricity on the grid, but offering compensation to the owner. "Some electric companies will either pay you back or the town lowers your property tax," said Howard.

Howard is well-aware of exactly how much electricity is being generated, used, and stored, thanks to technology hooked into his photovoltaic panels. Howard uses products by Enphase Energy to monitor his system. The monitoring system only costs about $12 a year, but has many benefits. 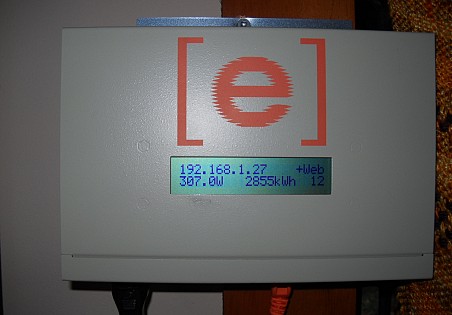 For example, Howard said he was having problems with his system one time and the company was able to reboot his system while he was on the phone with them. "It's so cool that they were able to do that all the way from California," said Howard. Howard is also able to monitor his system from anywhere via computer.

A new benefit Howard will be able to enjoy will be when the 2012 electric Prius is rolled out. Howard, who plans to purchase the new model, will be able to plug the car into his house – and charge it via solar power. "I'll have free local driving," he said.  He emphasized again that there are many variables when it comes to saving money with solar systems as well as the system paying for itself.

Howard, personally, just wouldn't do it any other way.