I was leery about hiring someone to take care of my yard, until I met this crew 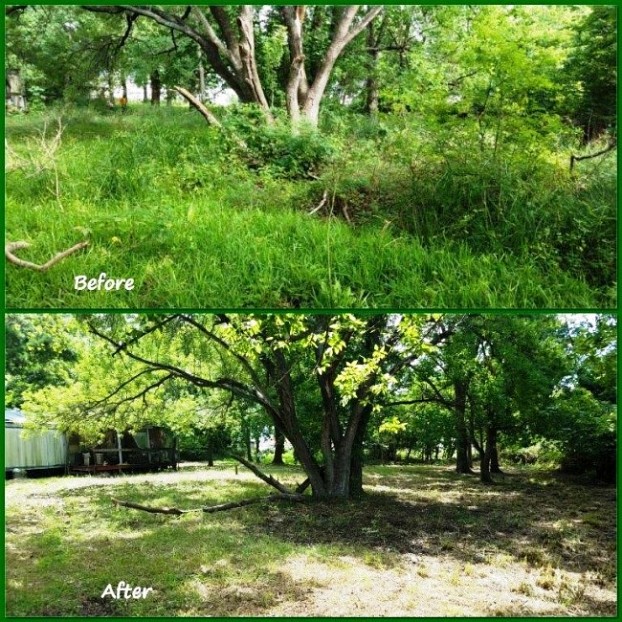 I live alone on half an acre out in the country and I was very leery about having anybody come to clean up my yard.

Once before, as a birthday present, my son sent some workers out to trim trees and branches. What got into those people I don’t know, but they loaded all the branches up and started a fire under the biggest tree in this yard to get rid of them. I had gone off to celebrate my birthday with my daughter so I didn’t know about the fire until I came back that night. When we pulled up, my daughter said, “Mom, I think that pile of wood is on fire!” I had to go and get water in the middle of the night to put out the fire, and the next day I saw they had burned the whole side of that huge 30-year-old tree. I don’t know what kind of idiots would build a fire right under a tree.

For a while after that, I told my son, “I’ll take care of this myself, hon.”  But lately we’ve had some really bad weather here in Texas, which knocked down a huge tree in my front yard. After that, we were inundated with rain, until my yard was just floating. And then the grass started growing ...

All in all, it was getting to look like a jungle in my front yard. When I had to carry groceries from driveway to my house, I told myself, “There could be snakes out there in the grass.”

Fortunately, I had just got a new smartphone. I don’t know how to do a lot with it (besides play games!) but I love that I could just say, “Come on, Google” and ask for yard work in Spring, Texas.

The first guy who came out to give me an estimate was from a contractor referral service ... which I would never use again for anything. After he left, I called him 3 or 4 times and he would never return my calls. Finally, a week later, this guy phoned me at 6:26 in the morning. I don’t know if he was drunk or on drugs or what, because he was whispering, “Do you still need me to come out and look at your yard?” I replied, “Sorry, sir, it’s been taken care of.” The next service just never called me back.

Another fellow that came to see my property told me, “I’ll get back to you with an estimate.” When I called the next day because I hadn’t heard from him, the receptionist said, “We won’t be able to do it this week but if we do it, it’s going to be $50 an hour, per man.” I answered her, “That’s $150 an hour! Well, I’m sorry, I can’t afford that.” She replied, “Well, okay then” and just hung up without another word. Nothing.

I finally got hold of Networx and within 30 minutes of the notice saying they had someone to do the job for me, Henry from Grounds Guys gave me a call. When he said, “I’ll come out to have a look at it,” I thought, “Yeah, I’ve heard this before.” Much to my surprise, he showed up like he said he would. Even better, he gave me an estimate which was about $200 cheaper than the other guy that came out. He was just so nice, so punctual, and courteous.

He and his crew did such a marvelous job on my yard for such a reasonable price that I signed a contract for them to come every 2 weeks for a year to mow my lawn. When he told me he was going to call me, he called me. When they said they were going to show up, they showed up. They’re very professional, let me tell you. They wear uniforms with the company name, give you a very nice portfolio explaining what they do and how they do it, and make up their invoices very competently. I’ve been around for a long time, but I was very impressed with Henry and the Grounds Guys.

When you get somebody who does what you expect them to do and goes beyond that, then you’re happy with them. Henry always calls you back. It might take an hour or so, because he’s usually busy, but he does call you back. That makes me feel important. I’m on a fixed income, so I’m real cautious about money, but if somebody came along and said “I’ll do your yard work and mow your lawn every week for only $10 a month,” I still wouldn’t let them do it. I’d say, “I have a lifetime commitment to Henry taking care of my yard.”

He’s a good guy. I would recommend him to anybody at any time. Find Trusted Pros
Contractors in Your Local Area
It's Easy, Fast and Free!
Find Trusted Pros
Grounds Guys Linda Thorpe: I couldn't have asked for any better results.Henry was punctual and let me ...


Contractors in Your Local Area
It's Easy, Fast and Free!
Find Trusted Pros
Grounds Guys Linda Thorpe: I couldn't have asked for any better results.Henry was punctual and let me ...