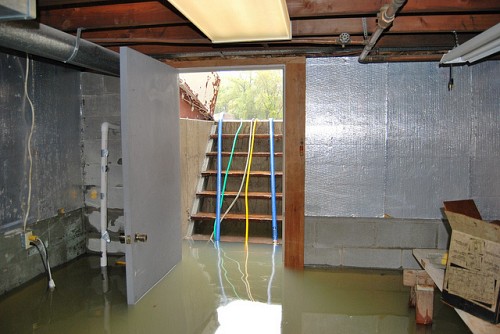 Many sump pump owners live in fear of a pump failure during a rainstorm or worse, during a rainstorm when they're out of town. Those who don't know this fear probably haven't had any problems with their trusty old pump. At least not yet. The hard truth is that sump pumps, like any mechanical device, can fail with or without warning. And a sump pump not working usually means a flooded basement. Often the causes of failure are painfully simple (because it hurts to slap your forehead that hard). With regular checks, some of the commonest problems are also avoidable (it hurts even more the second time).

Sump pumps often rely on a float switch to turn on and off automatically. The float rises with the water in the sump pit and turns on the pump when it reaches a preset level. It's a lot like the fill valve in a toilet tank, except the toilet float shuts the valve off when the water is high; a sump switch does the opposite.

The problem is that floats can get stuck -- from debris or gunk in the water, or from the pump moving sideways (due to motor vibration) so that the float gets hung up on the side of the pit or pit liner. Tether-style float switches are more prone to the latter problem than are vertical-style switches, but either type can get stuck. The best prevention here is to check the pit periodically for debris (making sure the switch assembly is clean and moving freely) and to test the switch by lifting it up or filling the pit with water.

Some pumps have electronic switches that don't have floats and therefore aren't vulnerable to getting hung up or otherwise stuck, but they can fail; read on.

Sump pump switches of all types can simply go bad. If your pump has a "piggyback" plug system, you can easily test for a failed switch by pulling out the pump's doubled-up plug from the outlet. The plug that goes directly into the outlet belongs to the switch; the plug that’s piggybacked into the back of the switch plug belongs to the pump motor. Separate the plugs and insert just the motor plug into the outlet; if the motor kicks on the switch is bad. Most switches are easy to replace (contact the pump manufacturer for a compatible replacement switch). After performing this test, don't forget to unplug the pump; without the switch the pump will run continuously and can quickly burn out.

Debris in the sump pit can cause more problems than hanging up your float switch. It can also clog the screen (if your pump has one) or damage or jam the pump impeller. This might cause a pump to hum but fail to move water, eventually overheating the motor or possibly killing it altogether. Unplug the pump, and remove and clean the pump screen (as applicable) and check the impeller for debris.

Silt, grit and rocks settle on the bottom of the pit, so make sure your pump is elevated by a platform or an integrated standoff system. Also keep the sump pit covered with a tight-fitting lid. Uncovered pits have a way of catching objects that can jam the pump, and they pose a danger to kids and pets, not to mention adults who like to wander around the basement in the dark.

If your sump system deals with laundry drainage and you have recurring problems with the sump pump not working, you might have the wrong type of pump and/or float switch. Soap residue and other debris from washing machines can foul up sump pumps and switches, so these setups (which may not be legal everywhere) need effluent-type pumps with tethered floats.

Any number of electrical issues can be the cause of a sump pump not working. It's preferable to have a pump on its own "dedicated" electrical circuit, which eliminates the possibility of another appliance or device on the same circuit tripping the circuit breaker and thereby shutting down the pump.

Sump pumps commonly are required to have GFCI protection, either at the wall outlet they plug into or on the circuit breaker itself. In the past, GFCIs were prone to "nuisance tripping" -- not a good thing for a pump safeguarding your basement, but today's GFCIs are more reliable. In any case, a GFCI still needs to do its job, and if a pump is poorly designed or is malfunctioning, it could produce a leakage current that trips the GFCI. A wet cord or outlet may do the same. If a pump keeps tripping a GFCI outlet, you can replace the outlet (for about $10 if you DIY), but if that doesn't solve the problem, don't blame the outlet ... you probably need a new pump.

Power outages are another big concern with sump pumps, for obvious reasons. The solution here is battery backup (lots of pumps have them) and/or installing a water-powered backup pump. This uses your home's water pressure (requires city water supply) to power the pump -- no electricity needed. Proper installation is critical so look for a qualified pro to tackle the job.

Sad as it sounds, another cause of a sump pump not working is that the pump has simply kicked the bucket. The threat of a pump dying from old age leads some homeowners to replace their pumps after a given period (some wait 5-7 years, some longer -- it's up to you). Whatever you do, don't hasten your pump's demise by letting it run too often or for too long. For example, a faulty check valve lets water in the vertical section of the discharge pipe run back into the pit every time the pump shuts off, so the pump has to move the same water twice. If your water table is very high, the sump pit may stay full most of the time, forcing the pump to run frequently or continuously (talk to local plumbers about this problem). And improper float settings can make your pump suck air at the end of its cycle or turn on too early. Make sure your pump is also large enough for the given load.