Hot Water Heater Replacement by a Family of Experts

I’m fussy when it comes to people working in the house, but I was happy with them 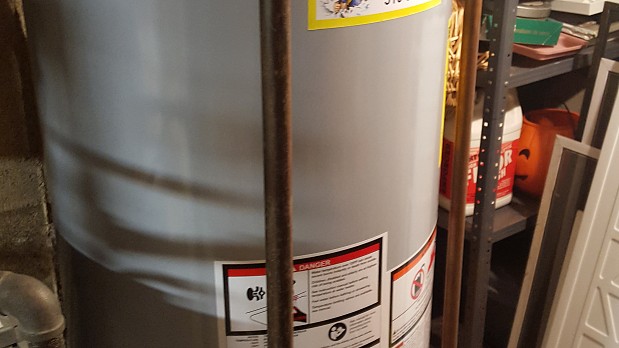 I got my money’s worth out of my last water heater, which lasted 28 years. I had called in a plumber about 5 years ago and said, “Should I replace it, as preventive maintenance?” After he checked it, he said, “No, just wait, because it still looks good. When it goes, you’ll know.” He basically told me, “If you see water dripping around the unit, it’s time to replace it. Shut off the valve, because it will just drip a little at first but if you leave it, then you can have a flood in your basement.” And I have a finished basement.

So as soon as I saw it dripping, I shut off the water valve and I made some phone calls.

I called a few plumbers. The first company that I contacted handles the service contract on my hot water unit and my burner. I already knew that the hot water unit was gone but I just wanted to make sure. So they sent someone out within the hour, who looked at it and said, “Yeah, you got your money’s worth. It’s definitely time for a new hot water heater.” I told him, “This unit lasted me 28 years.” And he replied, “They don’t make ‘em like that anymore. You’re never going to find a unit constructed like what you have.” So I said, “Okay, what do you recommend?” He recommended what they call A. O. Smith. That’s the brand name. All the plumbers I talked to seem to use the same hot water unit.

When I spoke to Family Plumbing, the fellow who answered the phone said, “I’m going to send my brother to give you a quote but he’s off today.” I answered, “Send him now, because whoever gives me the best price and I feel that they’re going to do the best job, I’m going to hire them right now. I want this done tomorrow." I didn’t want to be without hot water. So his brother, who is actually the owner of the business, came out. He seemed very knowledgeable. After I asked him a million questions, I said, “Okay, let’s do it.” He gave me a good price and then we negotiated.

I had asked my brother, who’s a kitchen and bathroom remodel contractor, if he could call his plumber to replace my hot water unit. He didn’t get back to me right away, though, and I really wanted it done the next day, so I hired the guy from Family Plumbing. Then that evening my brother’s plumber phoned me to say, “I could do it tomorrow.” Obviously he offered me a very good price, because he works for my brother. I called back Walter, the owner of Family Plumbing and said, “Look, you know I feel terrible.” When I told him the whole story, including the price, he said, “You know what? I already got the unit on the truck.” I answered, “Yeah, but the price.” In the end, he actually went $100 less than my brother’s plumber. So I got an excellent price.

Walter sent his father and his nephew the next day and they did a good job. They said they were going to be here at 10:00. Ten o’clock they rang my doorbell. I knew it was going to take about 2 ½ hours. They were out by around 12, 12:15. They were very neat and clean. I’m fussy when it comes to people working in the house, but I was happy with them.

They’re really a family business and they seem to be very close-knit.

He recommended an A. O. Smith  50-gallon tank like the other guy had. When I looked it up, I saw that it’s a pretty reputable hot water heater for the money. I’m retired, I’m at the end of my journey. I own my home but I’m probably going to be selling it in the next year or so and looking for a smaller place down south somewhere. Twenty-eight years ago, I paid $1000  for a hot water unit because I had just started out and I was raising a family, so I wanted to make sure it was the best I could buy at the time. Right now, though, my main concern was to buy a unit that works. The unit they gave me has a 6-year warranty, but everyone said the same thing, “You’ll definitely get a minimum of 12 years out of it. If you don’t play with the temperature gauge and you just leave it alone, you’ll get 15 years.” And I figure in 15 years, I’ll be long gone.

The plumber adjusted the new unit to a low setting and we’re getting plenty of hot water, a ton of hot water. It’s a 50-gallon tank, for just my wife and myself.

The unit that they replaced was exactly the same dimensions. When the guys from Family Plumbing came, I said, “Is there going to be a problem with the size?” But they answered, “No, you have one here. I’m just going to hook up the same flue the way they have it.” Like I said, the father came to install it, who was obviously the most knowledgeable, because he taught his sons and he was really good. The nephew did all the hard work and the father did all the technical work. I’m retired so I just sat here and watched them do it. He explained why he did everything this way so there was no problem understanding it. 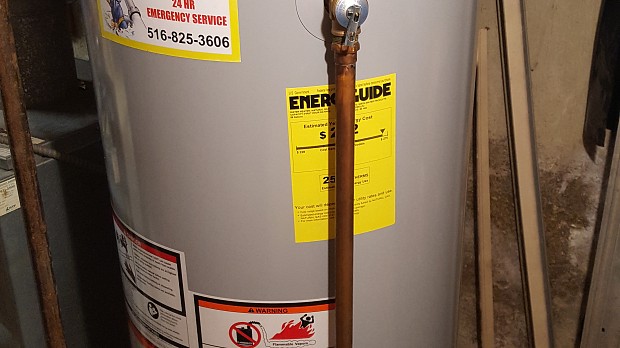 My advice: If you’re a new homeowner, buy the best you can afford. When I first started out and I knew I was going to be in the house for about 30 years, I tried to buy the best hot water unit that I could afford at the time. I had my own business; I was doing very well so I bought an expensive unit because I wanted it to last. I was happy if I was going to get 15 years out of it, but in the end, I got 28 years out of it.

I don’t like to hire general contractors. I’d rather go out and hire the plumber directly. My brother’s a general contractor but when I go to do anything on my house, I wouldn’t hire my brother. He’s licensed and he’s insured and if you have a problem, he’s going to come back and do whatever it takes to make you happy because his business is built on reputation. I understand all that. But I called 3 plumbers – that are plumbers, and the guy I spoke to was the guy that’s going to come and install it.

When I spoke to Walter, the president of Family Plumbing, I said, “Are you going to come yourself?” and he said, “If not me, it’s going to be my father and if not my father, it’s going to be my brother.” I said, “Are you all as knowledgeable?” He said, “As far as  installing the hot water unit, my expertise is actually the heating burners.” His brother and his father, their expertise is the hot water units. So I was happy when the father showed up.

I would hire a plumber to do plumbing, an electrician for electricity, but I would not go to a general contractor, because they’re just going to sub out the work and tack on. To me, you don’t get the best price that way. 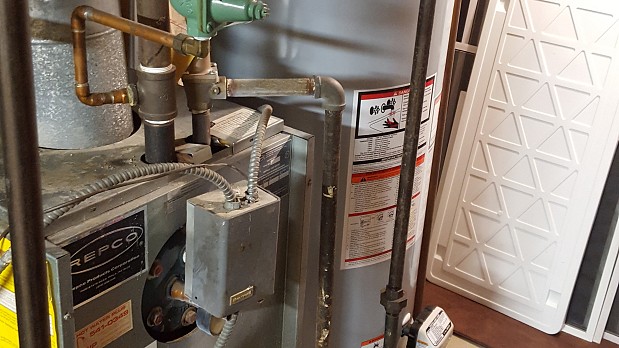 Find Trusted Pros
Contractors in Your Local Area
It's Easy, Fast and Free!
Find Trusted Pros
Family Plumbing & Heating, Inc. Glenn Garavuso: They did a nice clean job. They were very respectful of my home. I would ...


Contractors in Your Local Area
It's Easy, Fast and Free!
Find Trusted Pros
Family Plumbing & Heating, Inc. Glenn Garavuso: They did a nice clean job. They were very respectful of my home. I would ...

Hire A Meticulous, Highly Professional Plumber For Peace Of Mind by John M.

New Vinyl and Hardwood Flooring to Replace Water Damaged Floors by Glenda B.

My Remodeled Bathroom Is Modern, Clean and Beautiful by Debbie K.