The project was bigger than expected due to the discovery of water damage, but it turned out excellent

Submitted by R. B. in AZ
Find Trusted Pros 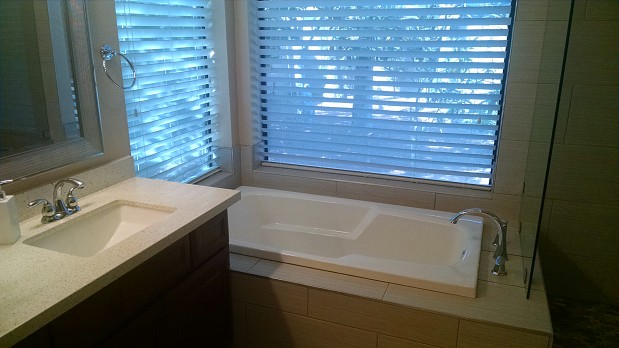 Both our bathrooms needed updating so we went for a full remodel -- shower, bathtub, tile, paint and countertops. We had a '90s look and wanted to change everything to a very modern appearance.

When selecting a contractor, we looked for good recommendations. If people said that the contractor worked closely with them and did a great job because he listened, was careful, tried to work with their schedule -- all of these things were important to me and that's how we selected our contractor.

Price is always important and we received a reasonable price but it wasn't necessarily the lowest price. But when this gentleman came in, he knew what he was talking about.

The contractor, Frankie at Phil Stratton Contracting LLC, was very professional. He put all the information in the computer and all was printed out really nice. When we wanted to adjust this or that, he adjusted all quickly and professionally. I could see everything, good transparency; it was all listed. When we discussed lighting, we didn't know what type but we knew we wanted lighting that faced down instead of out. He offered a number of good suggestions.

We had very good results, which I was kind of surprised at because it began as just a little remodel and yet it turned out to be a bigger project than we anticipated but still within our budget. They did an excellent job and we're quite pleased.

What you can't see is equally as impressive as what you can see. We didn't know what was happening under the shower pan, but when it turned out the pan was broken, hadn't been designed or done right, they had to fix the whole thing and they worked with our budget toward a quality job.

Our contractor Frankie offered options and suggestions that were really perfect on tile type and quality, blinds, countertops, overall approach, etc. Originally we were going to tear out the bathtub altogether for a slightly bigger shower because we never use the tub. Even though we've got a tub in the other bathroom, he said, "No, no, don't do that because it will devalue your house. You'll only have one and three-quarter baths. Even if you have a super-sized shower it's just not what you want to do……You will thank me later. I'd rather you have more than less and be very happy." He demonstrated why we needed a tub and why it would devalue our home to remove it, even if the shower was bigger. He said the nicer tub would add value as a deep, narrow soaking tub that would fit perfectly in the small space.

Well, I am just ecstatic and glad we kept the tub. People look at it and say, "Wow, this looks so modern and so nice, and it looks out at the garden. You'll always be in the tub" and I said, "No, my shower is designed just the way we like it, too." There's no door. There's a seat. It's one of those where I can have a rain shower on top or in the front and then I've got a separate shower and massage. It's just the way we wanted it. And I said, "I'll probably never use the tub, but boy, it sure looks nice too, every time we come into the bathroom."

He did everything just the way we wanted and more. Plus, he completed the project right on time. In fact he was a couple of days early. Our project was supposed to be about 4 or 5 weeks and it was actually 4 weeks. Frankie really worked with us on the timing. They took care of everything and put up plastic covers so that the dust wouldn't come in, for example. It didn't take long to do all of that. They were considerate enough to do some of those things.

Quite frankly, I was really surprised that it turned out as good as it did, having had some bad work and good work in the past. My advice: make sure you know that you're getting the right information so that you can make the right decisions when you're doing your project. We did and it was successful. 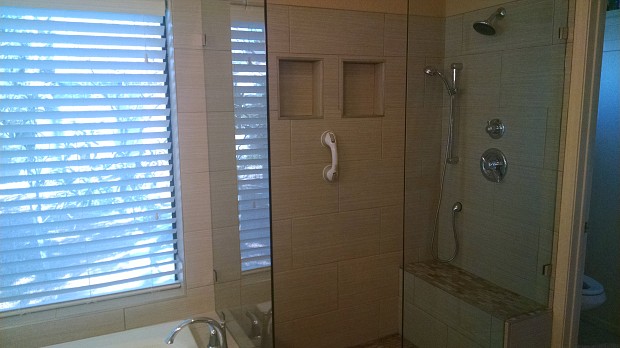 
Contractors in Your Local Area
It's Easy, Fast and Free!
Find Trusted Pros
A5 Construction LLC. R. Bardo: Very pleased. efficient, worked with our schedule, designed as we went ...

We Needed a New Bathroom Vent Fan to Get Our House Renter-Ready by Buck P.

Concrete Slab Installation for my Travel Trailer by Randell S.