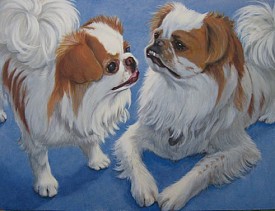 Several years ago, I had a design client who owned eight rescue cats and two large Labrador retrievers.  One of the rooms I decorated included a large formal portrait of the two dogs sitting side by side. Since the painting held so much meaning for her, it became the focal point of the space off of which all other items were set. In the painting, the dogs were sober and composed – which was not at all how they behaved in real life. The experience led me to investigate who paints dog portraits, and who buys them.

Christine Merrill (no relation to me) is a world-renowned artist whose work is represented by the William Secord Gallery in New York City.  She has specialized in pet portraits since 1975.  Dogs comprise about 99.99% of her commissions, with the majority being Cavalier King Charles Spaniels as well as Westies, Pugs and specialty breeds, aka "one-of-a-kind designer dogs".

Other pet portrait artists experience generally the same level of popularity of dogs over other type of pets. Adriana Willsie of Chicago refers to herself as an "upbeat artist" and enjoys bringing joy to her clients. She began painting pet portraits as gifts, and today they comprise the bulk of her business. Her "clientele" is comprised of both pure and mixed breed dogs, some cats and once even painted a Silver Laced Wyandot hen named "Spanky". Adriana notes that regardless of the breed, the one thing all her customers have in common is that "they’re totally head-over-heels in love with their four-footed friends".

Generally speaking, women are more likely to order a pet portrait, but it might be as a gift for a man in their life. Common to many clients is the predominance of people without children in the home, whether it’s empty nesters or those who never had children. Their beloved pet takes on that role.

Christine Merrill notes that it was during the 19th Century and the reign of Queen Victoria that pet portraiture was at its most popular.  "With the rise of a new middle class during the bustling era of the Industrial Revolution, people had much more time to indulge their new past times, and the income to do it. They copied their dear Queen and commissioned portraits of their favorite pets. Dog shows and refined breeding programs were also on the rise".

The William Secord Gallery specializes in 19th Century pet portraits and is the only one of its kind in North America. Until fairly recently, the gallery dealt only with antique paintings, but has branched out to represent contemporary artists as well, which possibly indicates a modern resurgence of the popularity of the art form. Adriana Willsie notes too that with the handmade revolution well under way "people are increasingly aware of the value of original, paint-on-canvas artwork, as opposed to reproductions."

While Christine Merrill’s works tend to be in a more traditional historical style with a sometimes humorous twist, Massachusetts based artist Jane O’Hara takes a very free-form approach to capturing the essence of the animal. In her process, O’Hara paints from photographs, but she does try to meet the animal subject if possible and its human companion to "get an idea of what they think is the outstanding personality trait of the animal. For instance, does the tilt of the head or a tongue out say something to the owner about their pet?" Once she’s gotten a feel for what makes the individual animal special, she then decides on how to capture this through her work. The size of the piece may be dictated by price, but it may also be a way to capture that "essence" of personality and could be large or small, a single image or a diptych, or even in comic book panel style.

Willsie, whose medium is heavy body acrylics on canvas, notes that her most popular size is 8"x10" but can also go larger or smaller, down to 4"x4".  She likes to learn how the pet came into their owner's life and special personality traits they posses in order to capture the unique essence of her furry subject. She paints from photographs and asks that the owner supply her with at least five photographs of the pet in its environment and from different angles.

Christine Merrill generally always meets with her animal subjects and takes her own photographs, unless the portrait is a memorial to a deceased pet, the clients live too far away, in which case she will paint from photographs or videos. Painting in oil on canvas, Merrill’s works can range from medium to large sizes, up to 30" x 40", particularly if there are two pets in the portrait.

As with all original art, pricing for custom pet portraits runs the gamut and cannot really be generalized or averaged.  Prices range from as little as $100 for work by artists showcased on Etsy to well over $10,000 for works by Christine Merrill, with the vast majority of artists somewhere in the low to middle range in the spectrum. The exciting thing to note is that there is a portrait artist for nearly every budget and style preference from serious to silly. Regardless of the nature of your beast, you can capture him in all his furry glory for posterity.

Linda Merrill writes for Networx. Get home & garden ideas like this on Networx.