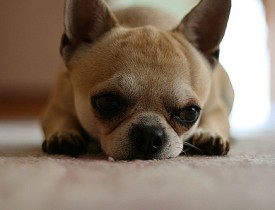 According to the American Kennel Club, "Dogs of the Working Group were bred to perform such jobs as guarding property, pulling sleds, and performing water rescues. The Doberman Pinscher, Siberian Husky, and the Great Dane are included in this group, to name just a few."

Advice from a Professional Dog Trainer

Unfortunately, according to Herb Everett, of Sirius Dog Training in Granby, MA, some dogs have gotten an undeserved reputation as a result of their breed, such as Pit Bulls. "A perfect example is the (Pit Bull) dog from the old show The Little Rascals. While they are great guard dogs, depending on their training they can be the most lovable, happy-go-lucky dogs around," claims Everett. Everett adds that certain breeds have become "a lightning rod" for negative impressions, such as German shepherds. "They (German shepherds) were originally bred for herding, not for protection."

Everett has been training dogs for 40 years, and advises that one of the best watchdogs you can get is a Chihuahua. "They may be a small dog, but they will raise so much hell until they alert you or wake you up," he explains. "Ninety-nine percent of intruders want quiet and no distractions. The other one percent will just shoot you and the dog."

Service dogs, which according to Everett can be almost any breed, protect their owners by means of assistance (such as seeing-eye, or hearing impairment dogs), or as a warning system for physical disabilities such as seizures.

Everett emphasizes that the training of the dog, how well they are treated, and how good the breeder is will give you the best results for the job you want your dog to perform. "Even all but two of the dogs that were taken from Michael Vick [an NFL player reportedly involved in dog fighting whose home in Virginia was raided] have been rehabilitated to be service dogs," mentions Everett.

An Opinion on Pit Bulls

The writer Vicki Hearne points out, regarding Pit Bulls: "Their stability and resoluteness make them excellent for work with people who might not like a more bouncy, flibbertigibbet sort of dog. When pit bulls set out to provide comfort, they are as resolute as they are when they fight, but what they are resolute about is being gentle. And, because they are fearless, they can be gentle with anybody."

The Best Dog for Pest Control

If you have problems with snakes or rodents, Everett recommends a Dachshund as your best choice for pest control: "Those little guys have a big ego, which they need to chase something like a badger underground." He states further that every type of terrier was bred to chase pests, particularly rodents, underground. "Terriers were bred during the time of the Plague to chase and kill the disease-carrying rats," points out Everett.

So, when considering a dog for any type of protection, it is best to research the breed you are interested in to make an informed choice. Everett suggests that an excellent resource for determining the best breed for the job you want them to do is the American Kennel Club, whose website specifies traits for every type of purebred dog. Remember: Choosing a dog for protection isn't just about the breed. How you train your new dog weighs in just as heavily.