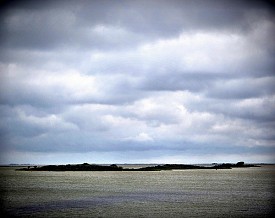 Everyone knows solar panels don't work on cloudy days, right? If there's no sun, how is a solar panel supposed to generate energy? That's why they're a great choice for warm, sunny climates like San Diego or Miami, but not so much for, say, Chicago. (At least, that's a popular argument, but in fact, most solar panels work just fine in overcast weather.) All that's about to change, however, thanks to a fascinating solar panel design that is actualy more efficient under cloudcover, making it perfect for those climates that, say, aren't so sunny.

All this means that Seattle electricians could be installing a slew of solar panels for their clients once the technology is perfected, which will add to the growth of renewables in the US energy sector. Organic photovoltaics, as they're known, have some pretty nifty features that make them something to watch in the coming energy market, and it's worth taking a closer look at how they work.

Don't be fooled by the name: you wouldn't want to eat these! Organic photovoltaics are produced from very small organic (in the chemistry sense, not the agricultural one) molecules, which allows them to be dissolved into a solution. Here's the cool part: once dissolved, they can be 3D-printed into any number of useful shapes. Sure, there's the traditional solar panel, but there are also other applications, like textiles, where a thin layer of organic photovoltaics could form a flexible membrane.

Their size and utility makes it feasible to extend reliable power sources to regions where conventional utility grids can't reach without tremendous cost, and where traditional solar cells aren't practical. In day-to-day operations, organic photovoltaics operate at about 10% efficiency in sunshine, and 13% efficiency on cloudy days. If that doesn't sound like much, you're right: some solar cells can get up to 40% efficiency. However, high-efficiency solar cells are also extremely expensive and have more limitations in terms of their placement and applications, placing them out of the reach of most consumer uses.

We're sorry to tell you that you shouldn't run out to place your order now. The technology probably won't be available on a commercial scale until 2019, because the researchers have some kinks to iron out (including the desire to increase the efficiency level). However, the tremendous progress being made in recent years with creative takes on solar technology and new applications for solar energy are positive signs for a country that's historically been very dependent on non-renewable energy. As more and more options (like membranes so thin and transparent they can double as windows) hit the market, consumers will have a wider library of choices to meet their needs, which will help them find the perfect solar tech for their situation.

For roofers and other contracting professionals who work with solar technology both directly and indirectly, the rise in the solar industry is cause for celebration. Remember, though, that as you're thinking about installing new tech, not all contractors are able to keep up with the industry. Be sure to ask people about their experience with similar installations, and consult contractors about whether they've had special training, attended industry conferences, and taken other steps to keep informed about the fast-moving world of solar.