My Fridge Is Leaking Inside! What Should I Do? 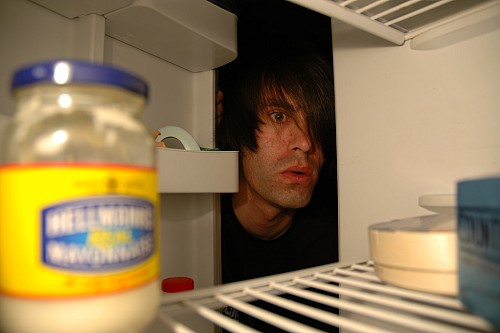 A major leak of water inside your refrigerator is certainly dramatic-looking and possibly even scary (as in, “I’m afraid for the wellbeing of my wallet if I have to shell out big bucks for a repair”). On the other hand, this type of leak does not tend to have a noticeable effect on the functioning of your fridge or freezer – besides making refrigerated food soggy -- so you may be tempted to hide your head in the sand and ignore the problem. Not such a good idea, as the leak will not go away by itself. However, it is actually quite an easy DIY fix. I’ve done this particular fridge repair myself, and lived to tell the tale.

My refrigerator is a fairly new frost-free, freezer-on-top model. I’d been noticing dampness on the bottom shelf for a few weeks, but didn’t take action until it had turned into a full-fledged leak. This happened to coincide with a particularly busy season for the repair service covered by my warranty. When I phoned them, they said it would be over a week before a serviceperson could come and repair my fridge leak. So I took a look at everyone’s favorite DIY fix-it manual – the Internet – to see whether I could clear up the leak all by myself.

My research was reassuring. Apparently leaking inside the fridge is usually less serious than deposits of water onto the kitchen floor. It seemed that the cause was the defrost drain. In freezer-on-top refrigerators, blockage of this drain due to ice or food debris is a simple and fairly common problem. Water that cannot escape through the defrost drain as it normally would ends up spilling out instead – hence the leak.

The solution is equally simple (at least in theory): unblock the drain. Well and good. The initial step of the instructions was doable. I removed the food from my freezer compartment and stored it in an ice chest. (If you are trying this in very hot weather, you could insulate the chest with blankets to keep in the cold air.) I also took the food out of the fridge to make cleanup simpler.

The next step was also easy. I disconnected my refrigerator from the power outlet to allow the liquid in the drain hole to thaw. I’d read that pouring hot water into the drain would speed up the process. However, first I had to remove the drain cover, which was also frozen solid. After several hours, I was able to wiggle it slightly, but it sure wasn’t going anywhere. Afraid to damage it by using brute force, I waited some more. Still no luck.

Finally, I decided to apply a little TLC, in the form of a hot compress placed over the drain. I had to replace the compress several times as it cooled, but within approximately an hour the drain cover was removable.

From there it was a simple matter of flushing the drain with hot water. Some people use a turkey baster for this but since the last time I roasted a whole turkey was … um … never, I don’t own this particular piece of kitchen equipment. Instead I used a funnel to pour a thin stream of warm water into the drain. After a short while the liquid ran freely, unhampered by any blockage. Problem solved!

Now, my successful adventure in the word of fridge repair complete, all that remained was for me to mop up the mess. Not the pleasantest task, but my warm glow of accomplishment made it so much easier to face.

EDIT "Where is the Drain?"

In reply to questions from readers about the drain (AKA "refrigerator drainage outlet") location, it's a small circular opening on the floor of the freezer, usually way at the back. Fridges vary, so check your user's manual -- either the paper copy or online -- for details. Thanks for reading!

For home repairs that you don't want to handle yourself, call a professional handyman.