Using a Circulation Fan to Save Energy 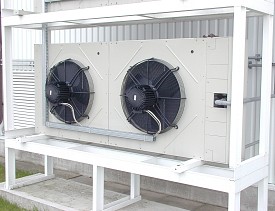 The circulation fan in an air conditioner can be a valuable energy saver ... in certain climates at certain times of day. Those are important qualifiers, because an air conditioning fan may actually increase your energy costs if not used properly.

The U.S. Department of Energy Office of Energy Efficiency and Renewable Energy recommends buying a central air conditioner with a fan-only switch but just using the fan-only setting when the outdoor temperature drops at night.

When to use your circulation fan alone

Use a circulation fan to circulate outside cool air into a home instead of running the A/C compressor, particularly in dry, mild climates. Experts at the Energy Extension Service at Kansas State University estimate that the compressor consumes 10 times as much energy as the fan in a central air conditioner. Therefore, the fan can keep the house cool, pull in more fresh air and save money on energy bills.

This only works at times when the air temperature decreases substantially at night. Of course, every person has a different idea of comfort, but circulation fans are usually a good bet when the outside temperature is below 85 degrees Fahrenheit.

When the fan actually increases energy use

On the other hand, in the daytime and on hot evenings during heat waves, using the fan-only setting may actually increase your energy usage. The reason is this: The air conditioner draws out moisture from the air of the room, which collects on the A/C system’s coils. When you run just the fan without the compressor, this moisture tends to evaporate once more, forcing the compressor to work harder when it cycles on again.

Set the fan to the “auto” position whenever the compressor is running, and the outside air is too hot.

For air circulation, it’s better to rely on ceiling fans in individual rooms while they are occupied. Ceiling fans offer comfort, but do not actually reduce the temperature, so even though they are energy misers, there is no sense in running them in an empty room.

When you run a ceiling fan, you can set your central air conditioning several degrees higher and still be comfortable. The fan will circulate the cooled air more efficiently, saving energy and money.

Another option is a whole-house fan, which is something of a hybrid between an attic fan and a ceiling fan. Whole-house fans typically go into the ceiling in a central part of the house. Designed to draw in cool air and exhaust hot air, they use about one quarter of the electricity of a central air conditioning system! However, whole-house fans are also only effective during relatively cool periods. Experts suggest that whole-house fans are most effective when the exterior temperature is below 82 degrees F.

Find the best cooling solution for your home and your climate. Contact an HVAC expert.