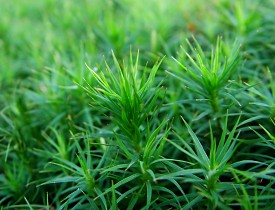 While moss is often cursed as a weed encroaching on healthy lawn, it is more likely an indicator that your soil and site are not ideally suited for grass. Instead, embrace and cultivate the moss as a hardy and attractive ground cover.

Where to grow moss

Moss creates a thick, velvety green mat in spots where most grasses and other plants struggle. Consider moss for areas with:

Moss can also handle some light foot traffic. On the other hand, moss will struggle and give way to weeds in bright sunlight.

How to grow moss

Those who struggle to get rid of moss in their lawns might be surprised to learn how difficult it can be to intentionally establish. It generally does not spread very quickly, and will go dormant during any dry periods.

First, have the soil tested and add sulfur if needed, to lower the pH to an acidic level between 5 and 5.5. However, avoid digging up the soil too much, as moss prefers firmly packed ground.

For spots with some moss, reducing the pH, misting with water and pulling some competing weeds should help spread the moss.

For new moss gardens, Ellis recommends collecting unwanted moss from another corner of the yard or a neighbor’s garden (they will likely be happy to let you pull up the moss for them).

There is likely no need to pay for moss, but if you must, look for local growers with established species that grow well in your area. Star, fern, broom, cedar and hairy cap moss varieties all are known for growing in a variety of climates. To plant moss sheets, adjust the soil to optimal acidity, clear the area, rake the surface and soak with water, then firmly press the sheets into place.

Ellis suggests crumbling the moss into a blender and adding equal proportions of buttermilk and water, and some stale beer. Blend until it is slightly thinner than pancake batter. Then pour the mix on your prospective moss garden site until the moss starts to grow. Mist regularly with water for several weeks, until the moss is thoroughly established.

Once established, Ellis notes it is virtually maintenance-free, as long as leaves and other debris do not smother the moss.

Moss also thrives under the same conditions as most azaleas and rhododendrons, so they make good ground cover companions.

Other uses for moss

Moss is a traditional ground cover in bonsai containers. It also works well between stones or pavers in a garden path, and between the rocks in a rock garden.

In addition to a variety of true mosses, some mossy-looking and mossy-sounding plants also make great ground covers.

• Irish moss or Scotch moss (sagina subulata) is a moss-like groundcover with small white summer flowers. It is ideal for rock gardens, but can be a grass substitute for some sites. It does best in rich, well-drained acid soils, according to Ellis, and is hardy in zones 5 to 9. Be sure to find the sagina species, as several other plants are also often sold as Scotch or Irish moss. Irish moss thrives in zones 6 to 9.

• Moss campion (silene acaulis) is a common wildflower in the high European and North American alpine tundra, but it can also be purchased and grown between paving stones in the higher reaches of zones 3 to 5. It grows in small mounds about 2 inches tall, and has a profusion of tiny flowers for a brief period in the summer.

• Moss pink or creeping phlox (phlox subulate) is another good option for garden paths and rock gardens. It forms a mossy carpet, but has plenty of spring flowers. Unlike true moss, it thrives in dry, sunny soil and does not tolerate much trampling, according to Diane Relf of Virginia Cooperative Extension. A variety of phlox cultivars are available and hardy in zones 3 to 8.