Is Geothermal Right for You? 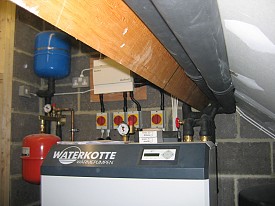 Geothermal energy is pretty amazing: by circulating water through a series of pipes under your house, you bring the warmth of the earth up in the winter, and force heat and humidity down during the summer. As the geothermal system (also known as a ground source heat pump -- which is technically more accurate, because this form of heating and cooling captures solar heat trapped in the earth's surface rather than tapping geologically active areas deep beneath the Earth's crust for heat) constantly counterbalances in synch with the seasons, you save a ton of money on energy costs, and you're not using very much energy beyond that needed to handle the pumping system. For those two reasons, you might be considering a geothermal installation in your new home or during a remodel.

Alternative energy is fantastic, but smart applications of alternative energy are critical. While geothermal heating and cooling might be just what the environment ordered for your house, that's not always the case. We're going to step you through the decisionmaking process you should use to decide whether this is the best option. If it's not, don't worry: a San Francisco HVAC contractor will have plenty of other environmentally-friendly ideas for you!

The first question is how much land you have. You need enough land to have a serious geothermal trenching system, and it needs to be easy to access and work with a backhoe. If you live on a tiny lot, geothermal systems aren't for you. If your acreage is steep, rocky, or otherwise hard to work, putting in a geothermal system might be more than it's worth. And remember: the bigger the space you're heating and cooling, the more trenching you will need.

Cost is another consideration. You should expect to pay for the trenches and pipes, the heat pump (around $10,000), and other sundry components. You may find yourself spending between $20,000 and $50,000, depending on the location and specifics of the system -- and it's worth talking to several contractors to get competing bids and enhance your understanding of what's available. With those numbers available, sit down and do the math.

How much do you spend on heating and cooling annually? How long will it take for the geothermal system to pay for itself? Are there rebates and other incentives available to cut the cost? Do you need to replace a failing heating and cooling system, in which case you'd be spending money either way, or do you just want to retrofit to be more efficient? Where is the electricity to run the pump coming from?

Make sure your system will pay for itself economically. If it doesn't, geothermal heating isn't right for you at the moment. That doesn't mean this won't change: when you do need to replace your existing system, or when prices change, it could be the far superior choice.

Remember that installing a geothermal system will involve: ripping up part of the landscaping, installing a pump that runs on electricity, and possibly replacing your existing heating system with forced air, assuming you don't have it already. These can be costly and/or undesirable endeavors that might prove to be barriers to making the jump to geothermal...so it's a good thing there are many other options out there.