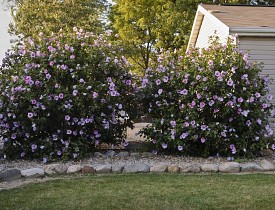 Flowering shrubs are a great way to add color, form, variety and fragrance to your landscape. Of course, shrubs may also seem intimidating. It's one thing to let a perennial die in a flowerbed. It's a different matter to have to dig up an established woody shrub that is diseased or just unattractive.

Fear the shrub no more. Here are 10 showy and fragrant, low-maintenance flowering shrubs that look great and thrive readily in many parts of the country. All these flowering shrubs are listed as easy-growing in Penelope O'Sullivan's "The Homeowner's Complete Tree and Shrub Handbook," and we have confirmed the low-maintenance status for each shrub with a cooperative extension plant expert.

1. Carolina allspice (Calycanthus floridus): In late spring, sweetshrub varieties such as the Carolina allspice will bloom in a variety of colors. O'Sullivan particularly recommends the floridus 'Michael Lindsey' cultivar, which has small maroon bell-shaped flowers with the scent of strawberries. Other varieties smell like spiced melons. The blossoms are sometimes used in potpourri or fragrance sachets. The foliage is dark green through summer, and bright yellow in the fall. It is hardy in zones 5 to 9, and tolerates full sun or partial shade. To keep the shrub from getting unruly, O'Sullivan recommends cutting back one-third of older stems.

2. Bluebeard (The hybrid clandonensis species of caryopteris): Also known as blue mist, the small bluebeard shrub has clusters of small blue or violet flowers that bring color and fragrance in the late summer and early fall. It's also one of the best attractants for butterflies and bees, according to the University of Arkansas Cooperative Extension. It is hardy in zones 6 to 9, and O'Sullivan notes it can be grown in parts of zone 5 with care. In zones 5 and 6, the stems are likely to die back in winter, but it will return. Drought-tolerant once established, the bluebeard does well in partial shade or full sun in loose, well-drained soils. Deadheading the flowers in August can promote more blooms.

3. Forsythia (Forsythia): Forsythia is a very common flowering shrub that attracts birds and resists deer. Some varieties can spread quickly to about 10 feet tall and at least 14 feet wide, but look for local cultivars that reach your desired size. The various cultivars bloom in spring with small flowers in various shades of yellow. Clemson University Cooperative Extension notes that forsythia may bloom as early as late winter. Somewhat drought- and pollution-tolerant, it is hardy in zones 5 to 8, and does best in full sun with well-drained soil.

4. Dwarf fothergilla (Fothergilla gardenii): As the name suggests, this shrub has been trained to stay as small as three feet tall and wide, but it is a little fountain of color. Interesting spring bottlebrush flowers have no petals and smell like honey. They give way to several shades of summer green, and various yellows, oranges and reds in the fall. It is hardy in zones 5 to 8, tolerates full sun or partial shade, and likes moist, well-drained soils.

5. Hardy hibiscus (Hibiscus syriacus): Also known as the rose of Sharon, the hibiscus is a stereotypical tropical flower, but the hardy varieties grow as far north as zone 5, especially with a hot summer and deep, protective mulch in winter. In fact, the University of Connecticut Cooperative Extension warns the hardy hibiscus can be invasive even as far north as Connecticut. It grows leaves late and flowers even later, but that means you get a splash of two-tone, late summer color. Depending on the cultivar, the blooms may be red, pink or purple. It likes full sun and moist, well-drained soil.

6. Smooth hydrangea (Hydrangea arborescens): Clustered hydrangea flowers are a florist's favorite, but it doesn't take a professional to grow the smooth, or wild, hydrangea. The shrub blooms with white flowers in early summer, and they can last for several months. This variety are hardy in zones 4 to 9, which covers most of the continental U.S. In the south, plant where they get some afternoon sun, but full sun is good farther north. Prune aggressively for the largest flowers. An even hardier variety is the panicle hydrangea, which grows to zone 3, and is less delicate in both appearance and growing habits. It can tolerate a wider range of soils than the smooth hydrangea, which needs moist, well-drained and heavily organic soil.

7. Sweet mock orange (Philadelphus coronarius): The mock orange is part of the hydrangea family, but blooms with small, single flowers rather than the clusters typical of hydrangeas. Still, it only takes a few of these flowers to fill your garden with their very strong, sweet scent. They can handle most soils and shade conditions, and are hardy from zones 4 to 8. Several cultivars have been developed for different regions and soil conditions, and with different leaves. Ask a cooperative extension agent or other green thumb about the best options for your area.

8. Viburnum (Various viburnum species and hybrids): Viburnum shrubs attract butterflies, birds and passersby with clusters of white or pink spring and summer flowers and beautiful foliage. However, many varieties are bug-prone and not considered easy growers. A couple of exceptions are the Burkwood 'Conoy' hybrid and the Blackhaw (or Prunifolium) species, notes O'Sullivan. The Burkwood's pink buds bloom into white spring flowers, which then give way to spicy-smelling summer foliage and deep fall reds. It is hardy in zones 5 to 8, tolerates drought and resists disease. The Blackhaw is another tough customer that can tolerate both sun and shade, and wet and dry conditions. It grows in zones 3 to 9, and also has white flowers and deep red fall foliage.

9. Chaste tree (Vitex agnus-castus): O'Sullivan is full of fun facts about the chaste tree (really a large shrub) or Monk's pepper. Both names relate to the shrub's berries, which allegedly help reduce sex drive. It's also known as the hemp tree because the divided leaves look like marijuana foliage. We're here for the cloud of small purple flowers which grow in cone-like clusters from June through September. The flowers also draw hummingbirds and butterflies. It grows from zones 6 to 9 in varied shade conditions and various soils. Virginia State Cooperative Extension notes that the plant is listed on some invasive species lists, but has found no evidence to back such claims.

10. Adam's needle (Yucca filamentosa): Finally, this is a flowering shrub for a xeriscape garden. The flowers are bell-shaped, and range from white to yellow. This yucca is drought-tolerant and can survive sandy, desert soils, and is hardy in zones 5 to 10, but does best in the warmer zones. In fact, wet, fertile soils are not good for this desert plant. Even so, keep in mind that it is nearly impossible to kill if you change your mind on the landscaping, and the spike plant may not be kid-friendly.