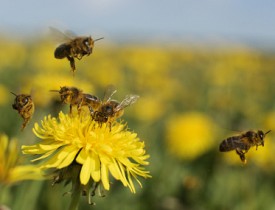 Why Are Honeybees Declining?

"The honeybees have been declining since the 1940s, so in some sense it's nothing new," comments Dr. Keith Delaplane, a professor at the University of Georgia's Honey Bee program. "What is new is the rate of that decline. In the past three winters, we have seen just a precipitous drop that really caught our attention. It's a bad thing gone worse."

Dr. Delaplane attributes a few factors to the sudden decline in honeybees. One is "the results of global mixing of organisms. It's very easy for somebody to travel to France and bring a honeybee queen back and use it to re-queen one of their beehives back home. It's illegal, but it happens quite a bit. It's very easy to imagine how new viruses and parasites can be transported around the world that way. I think that is one of the leading things. We've had decades of that with beekeepers traveling around the world and bringing back bees and restocking their hives with a queen from Timbuktu or something. It's not the bees, per se, it's the viruses they accidentally introduce that way.

One of these parasites is the Varroa mite, which Dr. Zachary Huang of Michigan State University studies. "I study how to control mites, which is a major pest, probably the number one," explains Dr. Huang. "They basically suck the blood from bees. It's like a tick. In sucking the blood from bees, it also transmits other viruses that make the bees sick. The bees get immunological disease just like the HIV virus and they lose resistance to other diseases."

Another disease that is wiping out bees is Colony Collapse Disorder, which makes the bees disappear. "You can't find the dead bodies," says Dr. Huang. "The adults are gone. Immature stages are left behind and the queen. It has been happening for four years now. We still don't know what causes it.

"Right now there are very few feral bee populations, bees that are not managed. They're slowly coming back. But almost 90% of the bees that you see on the flowers are managed. There used to be a lot of wild bees, but the mite came in and wiped out everybody. That's why we rely on managed populations right now for pollination."

What homeowners can do is use their landscapes to feed local bee populations. Dr. Huang suggests, "Plant flowers that could provide bees with nectar and pollen. In general, that would increase the biodiversity for other bees, not just honeybees." He continues, "If you have a lot of flowers, native or not, they provide nectar and pollen. Unfortunately, we are so hooked up with keeping a nice green lawn, which doesn't really do much ecologically. It doesn't really do anything for bees and other organisms."

So what does support bees? Dr. Delaplane emphasizes creating uninterrupted bloom on your property: "The real kicker for trying to improve your property for bees is to have an unbroken succession of bloom all season long. They depend very heavily on having a lot of stuff flowering in mid-summer because that's the time of year that they're producing next year's queens. Try to time your planting calendar so that there's always something blooming on your property.

"Here in Georgia, we have a real dearth in June, July and August. Most of the blooming plants are spring. What that means for a homeowner is you make note of those times in your calendar that are naturally short on flowering plants, and try to fill in the deficiencies. A good candidate is sunflower. Sunflower is a midsummer bloom. You can plant it and other times there's not a lot of other things blooming. Some of your sages are midsummer blooms. Crepe myrtle is a midsummer bloom.

"One of the best ways to get a varied diet with bees is to plant a lot of different plants. It's not necessarily the nectar, it's the pollen protein that you can diversify that way."

Dr. Huang mentions that even vegetable gardens can help feed bees. "If you have mostly greens, of course it doesn't help much, but if you have other plants that produce flowers that would help, too. A lot of cruciferous plants, like cabbage, produce flowers. Broccoli only when producing seeds in the later stage. Lettuce doesn't help, but in general even just a vegetable garden is still better than none, because even if it's not flowering, it still provides a home for caterpillars and stuff, which provide food for wasps."

"As far as nesting sites go for honeybees and other bees, bees like to have lands that are kind of undisturbed for the long term. A good example of this is a fence row or a hedge that goes for years and years without being mowed, or run over, or destroyed," points out Dr. Delaplane. "Bees love hedgerows. The longer they last, the more species-rich they get with flowering plants. In Europe, they have a longstanding history of putting hedgerows in between their fields, in England and Ireland. It's one of the best things you can do for pollinators, because it creates little islands in a habitat that may otherwise be rather unfriendly. Hedgerows with long-lasting plants is a good strategy for pollinators as well."

Subterranean bee nests need human TLC, too. Dr. Delaplane goes into some depth discussing them. "A lot of subterranean nesting bees have nesting areas that tend to be very long-lived. We're talking in some cases decades, even. If landowners are aware of these nesting sites, treating them gently with a gentle touch is really the best practice. Even something as innocent as driving across it with a heavy tractor, for instance, can kill subterranean bee sites.

"A lot of people notice [subterranean bees' nests] because for a period of several days, maybe a week, usually in spring there will be a burst of activity close to the ground of insects furiously flying to and fro. And if you look closely, you'll see that the ground is perforated with little holes. They're superficially similar to ant mounds. At first glance, you'd think that's what it is, an ant pile or something. In fact, a large number of these subterranean holes are soil nesting bees. Soil nesting bees are head and shoulders the biggest group of bees out there, even bigger than social bees like the honeybee, as far as number of species go. They also tend to be very active for a period of a few days, and then disappear for the rest of the year.

"The immatures are developing underground and you won't see them for several months. They're quite simple. Each one of them is just a simple borough that goes down into the ground. It's a dead-end tunnel. It gives a false appearance of being a colony because you see so many of these bees flying back and forth but they're not a colony. Their holes are not interconnected. Each one is its own little apartment, so to speak. The analogy is better to think of an apartment complex rather than a colony, because you have a bunch of individual females that are each of them nesting in their own hole.

"Most people, when they see these things, they freak out and they try to get spray and kill the bees; what I'm saying is: don't do that. These bees are very gentle. They don't sting. They're active for just a few days out of the year. During that active period they're extremely good pollinators. When you notice these sites, just make a mental note of it, and try to not destroy it. Don't plow it. Don't disk it. Don't drive over it. Don't bulldoze it. Try to keep it there. It will last a long, long time. That's one no-brainer. If you know where the bees are already nesting, just let them be."

Be an Urban Beekeeper

"Some of the best bees I ever deal with are urban bees," claims Dr. Delaplane. "We in Atlanta have not one but two thriving beekeeping associations in the metro area. Honeybees do great in an urban environment where there tends to be a lot more floral diversity than there is in an agricultural setting. It makes sense if you think about it. You have a lot of residential yards."

Dr. Huang adds, "Every state would have a state beekeeping association. Michigan has a website, Michiganbees.org. There's also regional ones, like Eastern Apicultural society, the Midwestern organization called Heartland Bees, and Western Bee Association. In each state there are county-based [organizations], like in Detroit there are SIMBA, Southeastern bee association, and there are about 400 members. In Michigan, we have probably 1000 beekeepers."

A Final Thought on Local Honey

"Another way you can support local bee populations is to buy local honey," recommends Dr. Delaplane. "It's consistent with the whole idea of buying local. In the case of honeybees, you're going to be benefiting local bees from local beekeepers. You're going to be enjoying honey that's produced in your neighborhood with your unique floral mix. It's just a no-brainer. Buy honey from a local beekeeper."