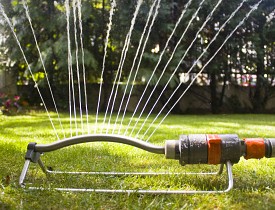 It may seem impossible to keep perfect green turf. However, most lawn problems are caused by a handful of diseases and bugs that largely can be prevented and controlled with the proper lawn care. Here are ways to identify five of the most common turf diseases, and some expert solutions.

Ironically, too much water can turn grass brown and make it appear dead. In hot, humid weather, a fungus is responsible for perhaps the most common American lawn disease, known as "brown patch," which can affect nearly all grass varieties. Brown patch creates irregular three- to 10-foot circles of grass blades with brown tips and bleached spots. In severe cases, the turf will appear sunken. Often, brown patch circles will look like targets, as the center of the circle sometimes recovers.

In “The Organic Lawn Care Manual,” Paul Tukey recommends caution with watering in areas with hot, humid weather. Water early in the morning instead of in the evening, as wet grass is more susceptible to the spread of fungus overnight. Rather than brief, frequent sprinkling, focus on deeper watering and letting turf dry between waterings. Also aerate to improve drainage, and avoid excessive nitrogen, particularly during hot weather. You may need to prune shade trees to allow the sun to dry the grass.

Fungicides should only be used for persistent and severe brown patch problems, and are not recommended for fine fescue or Kentucky bluegrass, according to experts at University of Massachusetts Cooperative Extension.

In a primer about leaf spot, Purdue Plant Pathology Professor Richard Latin notes that Kentucky bluegrass, perennial ryegrass and tall fescue are most susceptible to leaf spot. He suggests mowing high to minimize stress on the grass and to help keep wind-blown spores from reaching the grass roots.

Again, to prevent leaf spot, don’t add too much nitrogen in the spring. Also water deeply in the early morning and let the grass dry between watering. Latin also said turf areas damaged by leaf spot can be revived by overseeding with disease-resistant grasses. He said severe recurring problems may warrant a fungicide application, but recommends consulting a professional to both identify the fungus and apply the fungicide.

A lawn care challenge that many homeowners face is finding grass suitable for shady areas because often shaded lawns are susceptible to weak growth and nasty diseases, particularly powdery mildew. This fungus causes distinct whitening, making the grass look as though dusted with talcum powder. Powdery mildew peaks in the late spring and early fall, when the sun is lower in the sky, but there is still plenty of heat and moisture to support the mildew.

University of Nebraska Cooperative Extension plant pathologist Loren Giesler wrote that the best solution is to replace susceptible grasses with shade-tolerant, disease-resistant varieties or to prune trees to reduce shade.

Again, fungicides can be used sparingly, but if the outbreak is severe, even a fungicide won’t necessarily work, according to Giesler.

Red thread is another distinctive turf disease of the spring and fall. Fine fescues and ryegrasses are the most likely victims, but some bluegrasses and bent grasses grow red thread. As the name suggests, a fungus appears as red webs of pink or red threads that spread and quickly kill grass blades.

The dead blades look bleached, and may be interspersed with healthy blades or could take over a whole area, leaving scorched yellow patches.

To ward off brown patch, leaf spot and many pests, turf growers may be inclined to forego nitrogen altogether. Unfortunately, a lack of nitrogen will lead to weak, slow-growing grass that is especially susceptible to red thread, according to Cornell Cooperative Extension experts.

They recommend maintaining healthy, well-fertilized soil with a pH of 6.5 to 7.0. Like with the other diseases, avoid overwatering, water early in the day and ensure good drainage. Also, in affected areas, minimize shade cover that might leave moisture on the ground for extended periods.

Another water-loving fungus causes dollar spot during wet spring and fall weather, particularly when the daily temperature range is significant. As the name suggests, it typically starts as a patch of white, dead grass about the size of a silver dollar. However, it can quickly spread into larger patches. You may also actually see the fungus in the morning as white, cottony threads on the turf.

C.E. Swift of Colorado State University Cooperative Extension notes that some fungicide-resistant dollar spot fungi have developed, so fungicides should only be used as a last resort. Instead, try overseeding with disease-resistant seed wherever dollar spot problems occur. If the problem is widespread, it may be worth pulling up the turf, adding nutrients according to the results of a professional soil test, then reseeding or laying new sod. Swift also recommends cleaning mower blades, edgers and other equipment to avoid spreading dollar spot fungi between lawn areas.

Deeper, less frequent morning watering and other careful lawn care techniques should prevent most common turf diseases. If your lawn gets sick and the above treatments don’t work, consult your local Cooperative Extension agents for proper identification and treatment.