Aerate Your Garden Soil This Fall 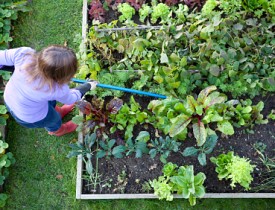 During elementary school, I remember my sense of intrigue when every year, finger-sized brown cylinders mysteriously appeared all over the surface of the sports field grass. I imagined that they were the droppings of some nocturnal animal. Eventually I learned that they were plugs of dirt produced by a core aerator, a machine with hollow tines or prongs that removes small cores from the soil.

I have also since learned that aeration is essential to maintaining a healthy lawn and garden. It allows roots and soil microorganisms to access a new supply of oxygen, while at the same time relieving compaction and promoting good humus formation and water absorption.

Unlike a lawn, a garden cannot be aerated while the plants are in the soil. Aeration in a garden involves turning the soil, which can be achieved a number of ways.

The Right Soil Conditions for Aeration

It is important that soil conditions be appropriate for aeration, which means moderately moist soil that crumbles in your hand when squeezed. If the soil forms one solid chunk when squeezed, it is still too wet and you must wait until it dries further. If it feels rock-solid or crumbles to dust, it is too dry. In that case, water well and then wait until it is moderately moist. Soil temperatures should also be moderate.

Soil conditions are ideal in the fall. This is the best time to mix in fertilizers and soil amendments, which will help the soil retain its structure. If your garden is well-maintained, it will not require tilling on a yearly basis; a thorough hoeing to 2-3 inches deep will suffice.

If you're tilling an area for the first time or after extensive weed growth, you'll need to dig a little deeper. The best manual tool for this job is a spade—square bladed, sharp, and straight. A shovel is best for mixing materials once you've already loosened the soil. Using a spade, divide up your soil into rows and then work along each row digging trenches about a foot wide and the depth of the spade. As you scoop dirt out of each new trench, use the dirt to fill the previous trench. Tilling your garden by hand is hard work, but it's good for your soil/soul!

If your soil is very poor or has never been worked, digging down two spade-lengths may be necessary. This has a double purpose: it aerates the soil on the upper layer, and loosens the soil at the lower layer, which allows roots to penetrate deeper.

A common mistake is to turn each spadeful of thatch- or weed-covered dirt completely over. This increases the chance of creating a thatch barrier under the soil which will cut off air and water. A better method is to lay each spadeful on its side, vertical with the ground.

For a larger area, you will want to rent or buy a rototiller. If the soil is extremely compacted, you may need to start shallow and then go over it again two or three times, deeper each time, but this is not going to be necessary in the average garden bed.

I should mention that it is possible to till your soil too much and too often. This may actually increase the likelihood of future soil compaction, interfere with the rate at which organic matter decomposes, and  encourage weed growth ... since each time you turn up new soil, you are also exposing new weed seeds. Surface aeration once or twice a year and deeper tilling less regularly should more than suffice.

I know it's still August, the time of plenty, but fall is just around the corner... don't forget to aerate!

For expert help with aeration and other garden tasks, find a qualified landscaper in your area.