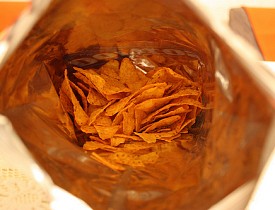 Devotees of classic Nacho Cheese flavor Doritos® know deep in their hearts that this is no ordinary snack food. Networx's former editor Chaya Kurtz accurately describes this sensory alchemy as “a complex balance of flavors — salty, umami, bitter, sweet, sour — all at once.” As a long-time fan of classic Nacho Cheese Doritos® myself (I consider the spinoff versions to be unnecessary meddling with greatness), I have undertaken this challenge with both reverence and trepidation. Is it really possible to replicate this unique flavor fiesta using ordinary household ingredients?

After an exhaustive trial and error process, the answer to my question is: not really. No matter how many formulas I tried, it just wasn't the real thing. Yet despite this ostensible failure, I did learn some valuable tips that I hereby bequeath to any other food-science-minded Doritos® freak aiming to be the first to crack the code. Please let me know if you think you’ve got it.

All of the brave souls before me who attempted to recreate Nacho Cheese Doritos® in their own kitchens (at least those I could find online) started with taco seasoning. This makes some sense, because the commercial seasoning packets share several of the same ingredients as Doritos®. So I shook some white corn tortilla chips with a little taco seasoning in a Ziploc bag. This tasted okay and had a generally Mexican flavor, but it lacked the zing, the sweetness and, most notably, the cheesiness of Doritos®. It also had several incidental flavors that didn’t belong, like cumin and oregano.

Not ready to abandon the taco seasoning, I experimented with it some more, but this time with the addition of other key ingredients gleaned from the Doritos® Nutrition Facts panel. For cheesiness, I added cheese powder from a box of macaroni and cheese—two kinds, in fact: cheddar cheese and 3-cheese formulas, both Kraft brand. The cheese powder added some body and broadly approximated the cheesy flavor in Doritos®, but the same shortcomings remained with the taco seasoning.

I then added what turned out to be the Holy Grail of Doritos® hacking: tomato powder. Unfortunately, I could find this only as an ingredient in dry spaghetti sauce mix (a product so far removed from goodness as to make instant coffee seem like an artisanal delicacy). The mingling of Italian-American and Mexican-American flavors was unfriendly, but the tomato powder managed to strike a tuneful note amid the noise. Way too much noise, though.

Resorting to culinary plagiarism, I tried to copy the Doritos® ingredients list straight from the bag. Extracting everything that seemed to be a flavoring (not a chip ingredient), I combined onion power, garlic powder, MSG (Accent) and salt along with the cheese powders (which also contained several milk-based ingredients from the list). This blend got me on the right track. However, I was still missing some key players simply because they’re not available in the store: tomato powder, red and green bell pepper powder, and Romano cheese (not available in powder form).

The unobtainable ingredients proved to be my downfall. (I briefly considered hijacking a Sysco truck for the industrial-grade flavorings, but the thought of explaining my motive to a jury put me off the idea.) The Romano cheese would add some much-needed sharpness and pungency to the cheese component, and the pepper powder must contribute something despite the innocuousness of bell peppers in the flesh. But the tomato powder seemed to be the clincher; without it, all was lost. So I decided to improvise…

Admitting defeat, I consoled myself with yet another handful of real Doritos® and set to work on creating my own snack chip, now not famously known as Dorivatos, owing to their clear lineage to the Great Chip. They’re not half-bad for an amateur attempt. I especially like the authentic Mexican heat from the cayenne, which you can adjust as desired.

Here’s how to make your own Dorivatos spice mix:

Blend flavorings in a mixing bowl and set aside. Cut corn tortillas into chip-size pieces, coat liberally with canola or vegetable oil, and bake at 350° until crispy and lightly browned. Quickly add chips to bowl and mix thoroughly to coat chips evenly with flavoring.

Doritos® were first developed in 1964 by Frito-Lay. The man who is widely credited as the chip’s creator, Arch West, died on September 20, 2011 at the age of 97. According to a New York Times story, Mr. West’s ashes were to be buried with those of his late wife, at which time, said the couple’s daughter, “We’re going to let everyone toss in a Dorito.”