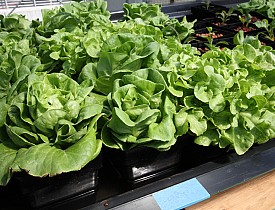 From the looks of it, hydroponic growing is on the rise and is here to stay. The numbers of hydroponics supplies shops are increasing right along with the numbers of farmers markets and CSAs. One such supply company is Gardening Unlimited, which owns a number of hydroponics and organic gardening stores in the Pacific Northwest. They started out with one small store in Santa Cruz, CA in 2003. Since then, public interest has encouraged them to open six more stores in the Bay Area alone, and they also distribute supplies through their website eHydroponics.com. Other such stores have sprung up across California and the United States. So what's the appeal of hydroponic gardening?

Hydroponics is the cultivation of plants without soil. Instead, plant roots are suspended in an aggregate material (like sand or rockwool) and are fed by a liquid nutrient solution. Hydroponic growing can be done outdoors, in greenhouses, or indoors (even in a closet) with the use of grow lights.

I asked Vando Bertaccini, the General Manager of Gardening Unlimited, why people are attracted to this type of growing. “Hydroponic gardening is for anybody who has a desire to garden but may be lacking outside space or light.” And these days, that's more and more people. As urban populations swell and suburban developments continue to sprawl, less and less land is available for traditional farming. This dearth of open soil is bad news for city-dwellers who want to try their hand at vegetable growing. Sure, there are community gardens, but it's not unusual to have two-year waits or longer just to get a plot.

Hydroponics offers an option for growing food without soil, without sunlight, and with less water input than traditional farming. As long as you've got a source of electricity and a little water, you can grow. If you set it up right, there's no worrying about weeding, pests, or inclement weather.

And, plants grow faster hydroponically compared to traditional growing. Is it difficult to learn hydroponic farming? “There most certainly is a small learning curve, but once one understands the basics, it's not difficult. Some might even say the process itself is rather easy,” suggests Mr. Bertaccini.

Sounds Too Good to Be True

Hydroponic gardening is perhaps less romantic than traditional gardening, but what about flavor? If there is a taste difference between a vegetable grown hydroponically and one grown traditionally, no one seems to be complaining. Some hydroponics enthusiasts even claim that hydroponically grown produce can taste better than what you find in the supermarket.

In fact, Mr. Bertaccini asserts that “hydroponic produce, harvested fresh, will always taste better than the majority of store-bought produce that has to travel a far distance to get to the market. Most conventional store-bought produce is usually devoid of flavor. A hydroponic garden that is taken care of properly and harvested at the peak of ripeness will most times yield a better tasting product than its store-bought counterpart.”

But does it make sense economically? According to Mr. Bertaccini, most hydroponic kits start at $60, not including the grow lights. He estimates the cost to power such a starter kit is about $10 per month. And if you want to get fancy, the price goes up. A sophisticated hydroponic system can include a variety of growing mediums and nutrients, water pumps and filters, air pumps, atmosphere and temperature controllers, and wall insulation and reflective panels.

In the ebb and flow system, your plants are situated on a tray in a growing medium like rockwool. Beneath this tray is a reservoir of nutrient solution. A timer, connected to a pump, is set to deliver nutrient solution at proper intervals into the grow tray, flood it, and then the pump stops and the solution drains back into the reservoir. This is similar to traditional agriculture along the Nile in Egypt.

The drip system is similar but instead of flooding the whole tray, each plant has a tube delivering a slow drip of nutrient solution from the reservoir.

Sounds a little much for a fresh tomato. As Mr. Bertaccini admits, “Unfortunately, it is not one of the less expensive hobbies.”

But if you're growing an expensive or hard-to-come-by crop, the economics start to make sense. For instance, heirloom tomatoes cost $5 a pound and up at many health food stores and farmers markets, so growing your own hydroponically may not be so expensive after all.

And Mr. Bertaccini is quick to point out that this is one of the factors that is making hydroponics more attractive. “With the skyrocketing costs of good quality vegetables, hydroponic gardening is a great option for folks who want to make sure they're getting the best they can get. One of the more expensive vegetables at the market, bell peppers, are amongst the easiest to grow hydroponically. And who doesn’t love fresh tomatoes?” And who doesn't love fresh tomatoes all year round, I might add? With the use of hydroponics and grow lights, you can even grow summer vegetables in the winter.

If you want to get started with, say, some herbs or lettuce, the easiest thing to do is to buy a completely self-contained hydroponic kit. For instance, the AeroGarden starts at $99.95. If you're really serious about hydroponic growing, check out eHydroponics.com or your local hydroponics supply store and speak with a staff person about your specific needs and budget.

Also, if you're planning on going big and don't have any qualms about buying your hydroponics equipment from the police, check out the items in the Home & Garden section of PropertyRoom.com. It is a police auction site selling lost, stolen, or forfeited goods and sometimes there are very good deals on hydroponic growing equipment. Go figure.

If you want info on that other plant you can grow hydroponically, check out this article from our friends at Mother Nature Network.