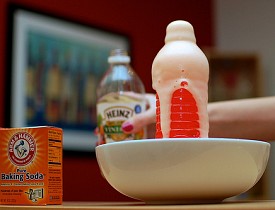 Fun food science experiments are a staple of childhood. We all remember the “vinegar and baking soda volcano”, but there are others that one can do with simple kitchen products.

Take a hard-boiled egg, put it in a jar and fill the jar completely with vinegar. Let it sit for a week. After the first day, the egg should start “bubbling.” At the end of the week, the egg should be rubbery and able to be bounced on the floor.

The vinegar eats away at the eggshell, taking the shell’s calcium and releasing carbon dioxide. All you have left is the egg’s membrane, with the protein and yolk inside. Because there is more water in the vinegar than in the egg (vinegar is 95% water and 5% acid), the water swells up the egg until the percentage of water inside and outside is balanced.

After you’ve bounced your egg-ball a bit, try putting your egg into one of these other solutions for a day and see what happens:

What do eggs and roofing in Cleveland have in common? The Case Western Reserve annual egg drop! During Case Western Reserve's annual Engineers Week festival, participants are challenged to build an apparatus that will protect an egg when dropped from a roof or balcony. You don't have to be in Cleveland to experiment with engineering. Host your own egg drop contest at home!

Fill a plate with milk. With an eyedropper drop different colors of food coloring into the milk. Notice how the dyes form circular blotches and don’t really mix with the milk. Now, take a Q-tip and dip it into dishwashing liquid. Transfer the Q-tip to the plate of milk and touch the surface. The dyes should now mix and swirl on their own.

Milk is not only one substance but a whole slew of chemicals, including fats and proteins. Some of these chemicals repel water. They’re called “hydrophobic” (water-hating) and keep water-based liquids like food coloring from mixing. The dishwashing liquid has a chemical that has both water-loving and water-hating parts, able to bridge the two (this is why dirty plates get clean). This lowers the tension between the milk and the food coloring and allows the two to mix.

Most people don’t think of rock candy as a chemical reaction, but it is. Heat up water to a boil. Add sugar and stir, making sure it’s all dissolved.  Pour the mixture into a jar, secure the lid and put it in the refrigerator. When it’s cooled, take a cotton string, dip it into the jar and let the string dry for a day. When the string is dried, remove jar lid and suspend the string on the edge of the jar, with half the string in the sugar water. Weigh the string down on both sides (make sure the weights are non-toxic). Leave the jar and weighted string out on a shelf for a week. During that time, watch the crystals grow. After the week is up, take the rock candy out, eat and enjoy.

More sugar dissolves in boiling water than when the water is at room temperature. When the boiling mixture is cooled, it holds more dissolved sugar than its natural limit and any change to the mixture can make the dissolved sugar materialize. When the jar is kept open, water molecules evaporate into the air, letting sugar crystals appear and stick to the string.

Julian Taub writes for Plumbing Networx. Get home & garden ideas like this - https://www.networx.com/article/fun-at-home-food-science-experiments - on Networx.