The Science of Vinegar 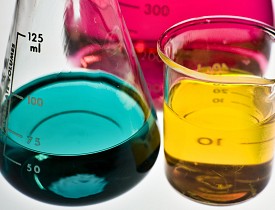 With the rise of environment-friendly products on the market, vinegar has emerged as a folk hero of sorts when it comes to cleaning agents. There is a surplus of books, websites, and advice columns about the wonders of this ordinary household item. Testimonials and how-to's can be important, but they don't explore the science and interactions behind vinegar.

What is vinegar and what can it clean?

Vinegar is usually a mixture of water and between 4 and 5% acetic acid. This versatile acid can mix with water, oil, alcohol and almost any other kind of liquid -- even gasoline -- reaching places that other cleaning products can't. When dissolved in water, acetic acid breaks into two components, the hydrogen and the remainder of the molecule, called the acetate. The hydrogen will try to bond to any molecule that it encounters, acting like a third wheel that weakens the molecule's structure. These hydrogens are great at cleaning stains made from alkali substances, like soap, urine, and limestone.

The acetate component has an extra electron that hangs off the molecule. The electron acts as a magnet to other atoms, especially metals, to make new molecules. For example, the acetate reacts with molecules in rust and grime and changes their makeup so the water can dissolve them. Acetic acid also gets rid of odors by killing off the bacteria and fungi that cause them. Its acidic nature destroys the cell structure of bacteria, and it stops fungi from turning sugar into energy.

Unlike strong chemicals, like hydrochloric acid, which get their strength by completely breaking apart in water, vinegar maintains a balance within water of about 1% separated acetic acid. This makes vinegar safe to use on cleaning surfaces, but makes it less effective fighting grease or carbon (char) buildup on cooking utensils.

Avoid using vinegar in these 4 ways

1. Do not mix vinegar with alkali-cleaning products like soap, lye, and bleach. They'll neutralize the vinegar and alkali at the same time, making both ineffective (not to mention potentially creating poisonous fumes, as with bleach). Sometimes, though, neutralization is useful, as when you mix vinegar and baking soda to unclog a drain.  The two will combine to create water and carbon dioxide, AKA the "volcano effect," increasing the pressure in the drainpipe and dislodging some of the clogging material.

2. Do not mix vinegar with an alcohol and a strong acid. You will stimulate a reaction which will completely change the vinegar and alcohol.

3. Never boil vinegar or even heat it up. At high temperatures, concentrated acetic acid will become corrosive and can burn through metal and rock.

4. Avoid using vinegar to clean upholstery, stone countertops or tiles, serious drain clogs, or ovens. With upholstery, the acetic acid could cause a stain. Vinegar tends to etch costly stone counters and tiles. Vinegar should also not be used to treat metals like iron, stainless steel, bronze, or copper. Following these guidelines and understanding the properties of vinegar can help you get the most from this alternative cleaning agent.

My Roof Replacement Was Simply Outstanding