Do Solar Panels Use More Energy Than They Generate? 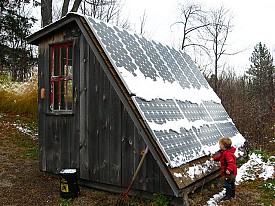 You've probably heard the claim that solar panels take more energy to make than they generate. That's a pretty crushing thing to hear if you've just hired an electrician to install a fancy new solar system, in the belief that you're doing the right thing for the environment. But is it true? We decided to look into it, and hopefully resolve the debate once and for all.

So here's the claim: As you know, making solar panels requires energy. There's the direct use of energy to manufacture and transport the panels and their components. Furthermore, you have to think about the energy debt involved in acquiring raw materials and converting them into the parts used to make solar panels.

That can add up fast, and a lot of solar plants are using fuels like coal to generate the energy they need for activities like melting silicon. Researchers Sally Benson and Michael Dale looked into the industry's energy needs and overall energy production for Environmental Science & Technology and published a paper detailing their findings (the full text is available to ACS subscribers only). What they found will probably allow you to breathe a sigh of relief: solar panels generate more energy than they use, overall, and have been doing so since at least 2010.

These findings may be attributed to changes in solar technology, the growth of the industry, and more awareness when it comes to energy use in panel production. The industry has reached a tipping point, and these findings are also in line with what the National Renewable Energy Laboratory has found when it's looked into solar panels and whether they truly offer energy benefits.

They specifically delved into what's known as "payback": how many years of operation does it take for a solar panel to generate as much energy as was used in its manufacture? They found that depending on the technology used, it takes between one and four years for solar panels to earn out on their energy debt. Consider that most panels are projected to last between 20 and 25 years with proper maintenance and normal use, and you can see that there's a net energy gain here that's rather significant.

For consumers, once they've moved through the initial payback phase, their panels are generating energy without consuming energy, putting lie to the claim that solar panels use up more energy than they can possibly make. The fact that this myth persists, however, is important, indicative of the the slow adoption of solar technologies and the confusion circulating among members of the public about the pluses and minuses of alternative energy options.

As the industry grows and progresses, solar panel factories currently relying on outdated energy generation technologies like coal will ideally turn to alternative energy -- such as solar itself -- to power their operations. One reason coal remains persistent in the solar industry is that very high temperatures are required for the processing of some materials. That may be about to change thanks to the development of products that don't rely on silicon, which has a notoriously high melting point.

If you're considering solar and you've been put off by this claim, now you've got some science to counter it: solar panels are definitely the right choice if you want a net energy gain. You may have other issues to consider before installing them, and you'll definitely want to discuss those with a solar contractor, but you can at least rest assured that the net impact of your solar panels on the environment will be positive, not negative.

So if you're developing a green house, don't be afraid to put solar back on the table. Especially if you live somewhere with lots of sun and mild winters, it could be a great choice for you; an Atlanta roofer, for example, would probably be excited to work with a solar panel installer on making your home generate energy for you.