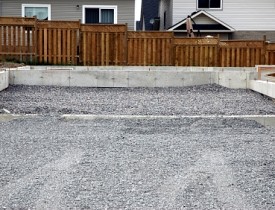 There are three basic types of concrete foundations. In some areas, only a surface slab is possible. Otherwise, crawl spaces and basements are also options. Each broad category has additional requirements and limitations, largely based on the soil, water and geography in your specific area.

Find out more about each type.

Surface-level slab foundations are often a poor choice, although sometimes there is no other option. Slabs are most common in areas with a shallow water table, such as Jacksonville FL, or where a deeper foundation might mean blasting through solid rock. Slab-on-grade foundations are a relatively inexpensive and quick project, but they bring complications.

Pouring a concrete slab requires careful prep. The ground underneath must be cleared of roots, stumps and other potential problems, and then compacted and covered with crushed rock. In some areas, a vapor barrier also is required. In places with freezing temperatures, the concrete slab needs extra structural support to help keep the slab from cracking. Perhaps the biggest disadvantage to slab-on-grade foundations is the fact that utility lines are buried under a thick slab of concrete. This makes repairs expensive, and leaks can increase the risk of mold exposure in the home.

If possible, dig underground rather than simply laying a slab. A crawl space prevents problems that can be brought on by slab foundations. Importantly, crawl spaces allow relatively easy access to plumbing and other utilities, especially if you build deeper than the typical 16 inches, making it a crouching space rather than a literal crawl space.

Hire a contractor to pour a concrete footing for your crawl space, and then build low foundation walls. Insulated concrete forms are a popular and sustainable option. These are light but strong foam blocks that hold poured concrete, then remain in the walls and foundation, reducing the amount of concrete required and, again, improving insulation. You also need to carefully add a vapor barrier to keep moisture and mold from creeping into the house.

A crawl space will save you the effort and cost of building a full basement; however, it doesn't offer the advantages of a basement, such as space for a family room, laundry, or home entertainment center. Retrofitting a crawl space to add a basement later will be expensive, so don't build a crawl space if you think you might eventually want a full basement.

If your soil, water, and budget allow it, we recommend constructing a full basement. In fact, you should take it a step further and add some extra depth to the foundation walls, allowing for a full eight feet of clearance below the joists, support beams and pipes.

Basements require extra waterproofing materials, such as liquid asphalt with rubber additives, particularly if you plan to finish the basement space eventually. It can be easy to recover the additional cost of a full basement. Resale value will increase significantly, and finishing the basement is a relatively inexpensive way to add some extra living space.