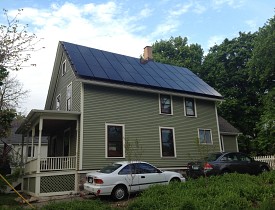 When planning my visit to Michigan to see my daughter graduate college, I took the opportunity to invite myself to spend the night at an over 100 year old net zero energy home renovated and owned by friend and fellow green building geek Matt Grocoff and his wife, Kelly.  Just a short walk from oh-so-trendy downtown Ann Arbor (an area complete with mini wind turbines on LED streetlights), the Grocoff’s managed to transform their formerly run-down house into an energy generation machine without the typically extensive and invasive work required for deep energy retrofits.  Opting against replacement (yea!), they retained and repaired the existing wood, single glazed windows, adding high quality exterior storms. They installed cellulose insulation in the existing walls, and applied spray foam to the roofline.  The house is littered with CFL and LED bulbs and more occupancy sensors than I can count that turn off lights and fans automatically, saving energy in the process.

So far, so good, but now comes the sticky stuff – solar and geothermal!  Oh, no, not the eco-bling!  As I’ve stated before, most people don’t need solar panels on their homes. High priced HVAC equipment like geothermal heat pumps are often little more than expensive bling stuck on big, inefficient homes that don’t save as much energy as other, simpler measures would.  But in this case, Matt and Kelly have done all the right stuff – the house is small (1300 Square Feet), they actually turn stuff off, they have insulated and air sealed everything, and they pay almost ridiculously close attention to every bit of energy they use, comparing it to how much is generated by their rooftop solar panels.  Matt and I geeked out about their online energy management system for so long that Kelly eventually wandered off and left us to look at computer screens, interactive thermostats, heat pumps, and the gauges that manage the amount of energy their chicken coop uses.

Yes, there are some people out there who are entitled to install solar panels and geothermal without incurring my wrath, and they live in Michigan.  This house does an incredible job of honoring its historic attributes while, on average, generating more energy than it uses.  I was most amazed when we were tracking the energy generated by the solar panels as the sun was setting – they were still creating more electricity than the house was using for several minutes after sunset!  You can track the home’s real-time energy generation!

Now, don’t mistake this post for any significant change in my opinion on the general state of solar and geothermal in most residential construction.  Too many people still use these technologies to excuse themselves for building homes that are too big and inefficient.  Matt and Kelly walk the walk by living in a modest house in a walkable neighborhood, and carefully manage their energy use.  A less responsible family could easily keep this house from operating at net zero energy.  I was a little worried that Matt wouldn’t be pleased with my various rants against solar and geothermal, but I found that we agreed on almost everything having to do with efficiency and green building.  Location, energy efficiency, and behavior are the most important issues – once you tackle those, then you can go for the bling.  But not before you take care of the important stuff.