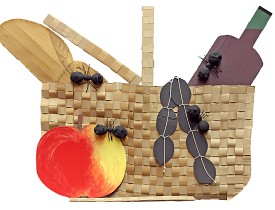 I grew up in southern California, where ants and humans coexist peacefully, where encounters are infrequent and almost always happen outside. Unless you offered them an open invitation - like leaving food strewn about your home – you just weren’t likely to need to hire a San Diego pest control company.

These days I live in Portland Oregon, where ants play a whole different kind of game, and run-ins are just a part of seasonal housekeeping. Every year, like clockwork, in spring and in autumn, the ants will visit. For weeks on end. For no apparent reason.

At first my husband was embarrassed. And suspicious. He thought the ants meant our kitchen was unclean, and blamed my dedication to our little compost project. That is, until he overheard all his coworkers chatting and joking about their own twice-yearly tiny black visitors. Every one had the same darn problem.

And that’s how people seem to think of ants – as a pest problem. As I sat down to do some research, I couldn’t help but notice that everywhere I looked, ants were referred to as “pests.” And okay, I get it. They’re pretty annoying when they march on in to your personal space. But also, ants are totally amazing. Ants deserve a little respect! And I want to tell you why.

Ants matter because ants are matter – exactly as much matter as humans, to be precise. That is to say, if you were to add up all the biomass of people in the world, it would be roughly equal to the amount of ant biomass in the world. Suddenly they don’t seem so small, eh?

Ants are community-oriented animals. They live in incredibly complex ant colonies and adhere to impressive social structure – even when membership can exceed one million individuals. Show me a human society that’s managed the same sort of success.

Ants are tough as nails. They can lift 50 times their own weight, the equivalent of an adult human bench pressing a full-sized sedan.

Also, when ants fight, they fight to the death!

Colonies are matriarchal, totally controlled by a single queen. And that lucky lady does all the breeding.

But that’s not where the girl power ends. All the worker ants are female as well. All those ants you see going about their business in your house? All female. All that heavy lifting and amazing navigation and incredible memory? All female. You go, girls.

Ants are environmentalists, too.

Ants are ecological helpers, because they add nutrients back into the soil. Much the same as earthworms, ants also mix and aerate the earth as they build their burrows.

And finally, being predators, they will eat many of the real pests that plague us, such as garden aphids and scale insects.

So the next time you’re facing down a little home invasion, try to remember that those teeny tiny creatures are actually pretty incredible, and maybe they’re up to some important business of their own!