15 Facts About Ants and How to Keep Them at Bay 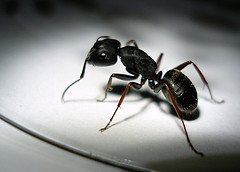 1. Ants are related to wasps and bees (as evidenced by their trim abdomens, or "wasp waists"). All these creatures are members of the insect order Hymenoptera.

2. Although human beings tend to look down on them, ants are actually organized into a sophisticated society, which researchers study as a model of cooperation.

3. Ants are to be found almost everywhere on the planet, with the exception of Antarctica and a few isolated islands. In some places, they comprise as much as one quarter of the land animal biomass.

4. All ants hatch from eggs laid by the queen of their colony. These eggs do not require fertilization in order to hatch. If they are fertilized, they will result in female (worker) ants. Unfertilized eggs produce males.

5. A major reason where there are so many ants around is that they are non-aggressive and do not reduce their own numbers by killing each other off. Food for thought!

6. Although ants are most commonly seen in homes during the late spring through summer, they may infest your kitchen at any time. In fact, in some areas they live outdoors in the warmer months and come inside when the weather turns cold and wet. These insects can appear or disappear literally overnight.

7. The ants you spy in your kitchen may be members of many species, including sugar ants, carpenter ants, little black ants, Argentine ants, or others. To find out which type your home is hosting, catch a few and take them to your local university extension service for ID.

8. Keeping your kitchen squeaky clean may work to keep ants at bay … or it may not. While avoidance of food smears on your countertop or in your garbage pail is an obvious preventive measure, ants have been known to make themselves at home in cupboards used for storage of dishes or canned goods, with not a morsel of nourishment in sight.

9. Protecting your groceries will not get rid of ants, but it will help to keep them from getting at your goodies. Store items in airtight containers so that ants will not be attracted by appetizing odors. This applies not only to chow for humans, but also to pet kibble.

10. Seriously sweet "ant bait" such as jars of honey or jam (and ketchup bottles -- trust me, I know what I'm talking about) can be placed in a shallow dish of water or inside a ring of sticky-side-up adhesive tape. This makeshift moat will deter ants from reaching their sugary prize.

11. However you try to safeguard your stash of edibles, though, be warned that ants rival Harry Houdini in their ability to penetrate sealed spaces. One of my favorite ant-proof hiding places for treats used to be inside the refrigerator ... until I found teeny tiny ants squashed between the fridge frame and the gasket.

12. Ants, being social creatures, are great communicators. They spread the message "Yummy cuisine, right this way!" by marking scent trails for their fellows to follow. Disrupt these trails by wiping the area with vinegar; citrus oil, juice, or peel; rubbing alcohol; or boiling water. However, never use acid on stone items like marble countertops -- it will eat away at the surface.

13. All kinds of powder are rumored to be fantastic ant deterrents. I have tried cinnamon and baking soda, but found that the only effect they had was to make a dusty mess in my kitchen. Your mileage may vary.

14. Borax is another highly touted anti-ant tactic. The problem is that Borax is toxic to both animals and human beings, making it a less-than-ideal solution in households with toddlers or pets.

15. A more efficient method, and one which I have used successfully, is prevention -- keeping the ants from getting a foothold in your kitchen in the first place (that is, if ants can be said to have feet). Hire a handyman to create a barrier by filling holes in your walls and sealing spaces between your counter and the backsplash.