17 Things You Never Knew About Turkeys 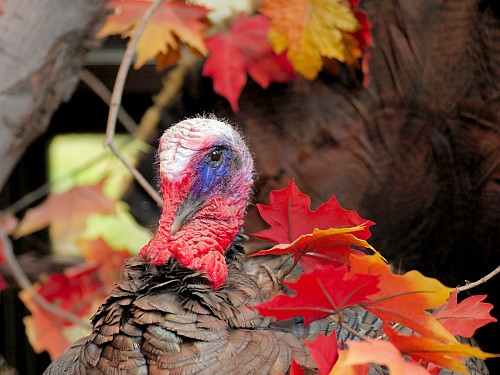 1. Turkey is the star of Thanksgiving dinner for 88 percent of all Americans, who eat a total of 46 million of these tasty fowl on the fourth Thursday in November. Although Canadians celebrate Thanksgiving six weeks early, on the second Monday of October, they too tend to express their gratitude over a roast turkey, consuming 3 million whole birds as well as turkey products.

2.  When being raised for human consumption, turkeys themselves chow down on a diet of oilseeds like canola, corn and soya, plus grains such as wheat and barley. They are allowed round-the-clock free access to their food and water. In the wild, turkeys munch grass, seeds, nuts, berries and -- yum! -- bugs.

3.  The familiar domestic turkey descended from the wild turkey, a native of North America, thousands of years ago and was originally domesticated in Mexico.

4.  Wild turkeys are capable of short flights at an amazing 55 mph. In the evening, they will fly up into trees to take shelter, out of reach of predators, for the night. Due to modern-day breeding techniques, domesticated turkeys can't fly. Some can't even walk without falling, because of their overdeveloped breasts.

5.  Since baby turkeys (called "poults") don't learn to fly until they are about two weeks old, their mothers spend the night on the ground, warming and protecting their young.

6.  Mature turkeys have some 3500 feathers, most of which go to compost after the birds are plucked. Turkeys with white feathers, which do not leave any mark under the skin, are especially desirable.

7.  Male turkeys, or "toms," are the only ones that gobble. Females ("hens") cluck or chirp. Whichever gender it may be, each turkey has a distinctive voice that can be recognized by its fellows.

8.  Another characteristic of male turkeys is that they spread their handsome tail feathers in a display aimed at attracting a mate, similarly to peacocks. Females are much less impressively befeathered; contrast their dowdy browns and grays with their hubbies' reds, greens, and coppers.

9.  Lest you assume that turkeys are brazen showoffs, be aware that they can -- and do -- blush. The featherless skin on turkey's heads and necks is capable of turning red, white, or blue in a tom or hen that is overcome by emotion. Fear, excitement, illness, or romantic interest all may inspire this colorful reaction.

10. You'd think that some turkey geniuses would have figured out what we humans really want from them and spread the word among their fellows. But the generous-spirited turkey remains sociable and even affectionate.

11. Benjamin Franklin, one of the best-known figures on the 18th century Philadelphia landscape, was a fan of the turkey. He once wrote a letter to his daughter in which he called the turkey "a respectable bird" and went to some lengths to compare it favorably with the bald eagle.

12. Turkey meat -- especially from the breast -- is low in fat, yet high in protein. Dark meat has more iron, B vitamins, and zinc.

13. If you don't get a chance to eat your fill of turkey at Thanksgiving and Christmas, you can still look forward to National Turkey Lovers' Month in June.

14. Conversely, if you're not a big fan of the gala gobbler, you might want to cook just a breast or a boneless roast rather than committing to a whole 20-pounder.

15. Thaw frozen turkey safely. Either leave it (wrapped) in the refrigerator one day for every 4 pounds of weight or immerse in cold water, changing every half hour, for 30 minutes per pound. Some new turkey products on the market are designed to be cooked directly from the frozen state -- read package directions carefully.

16. Are you tired of the traditional roast turkey and gravy? Try barbecuing, deep-frying, or smoking your Thanksgiving bird instead.

17. Vegans don't have to give up their love of savory stuffing (some say it's the best part of the meal!) at holiday time. They can simply bake their favorite dressing mixture in squash or zucchini halves.

Time To Replace The Heat Pump – Before It Broke Down Completely